Why Do We Err?

People make bad choices every day. And despite how much I blog about economics, no I am not talking about "irrational exuberance" in this case.

A close neighbor of mine seems to have all the appearances of a drug dealer. I can't prove it, of course, but I can say this much with absolute certainty: the aromas wafting from their door testify to the fact that they are heavy users, if not dealers. I only realized that they were dealers recently, upon a bit of introspection on the matter.

Let's be absolutely clear on one thing: people who do drugs, and people who sell drugs, aren't fooling anyone else. We all see them, we all know who they are, we all know what they're doing. In regard to all of this, we're nobody's fool. The fooling begins after the fact. The dealers and users fool themselves into believing that no one else knows what they're doing. We, the neighbors, fool ourselves into thinking it's no big deal, or that it's not taking a toll on the neighborhood, or that kids will be kids, or etc.

An acquaintance of mine has been romantically involved with a man who doesn't love her for years. Every so often, he takes her out on the town, shows her a good time, gives her flowers, says some nice things about her, and she forgets all about the fact that he doesn't love her. She doesn't want to think about it, because it's a buzzkill. She wants to be pampered and sought-after and desired and so she shuts the love thing out of her mind long enough to enjoy a little meaningless make-believe. She doesn't want to face the part of her that wants to be genuinely loved so badly that it makes her terrified of being alone.

Why do we do it? Why do we lie to ourselves? Why would we rather lie to ourselves than confront and acknowledge our weaknesses and move on toward a more productive approach to whatever aspect of our lives we happen to be talking about?

Look, I'm not going to debate how destructive and wrong drugs are. I don't care how many great people you know who have done them. Deep down, everyone knows what I am unafraid of saying: drugs are terrible. And you know it.

Likewise, a lover who flatters you with everything but love is a John. You know it, I know it, he knows it.

Why do we lie? Why do we pretend?

We do it because we're scared. We're scared of what it might mean if we acknowledge the error of our own actions.

Look, I'm no saint. I've gotten a lot of things wrong over the years. But why be afraid of admitting it? I am guilty of every wrong thing I have ever done. I will not fear my mistakes. Instead, I will mend them and try to be a better person in the future. But fear? That's not my gig.

I have said before that fear is the single most destructive force on the planet. I feel that from the bottom of my heart. Fear can chew up absolutely anything. The noblest, purest, most wonderful thing in the world is powerless in the face of fear. It is an incurable disease that can undo - and has undone - every good thing anyone can think of.

Push fear out of your heart and mind as soon as it appears or rue the day you made it your master. Whatever you do, keep clear of fear's event horizon. Muster up your best courage and let life have its way with you. You might screw up, and you probably will. Heaven knows, I have. But don't be scared. However bad it gets, it is always worse with fear.

John Mauldin over at The Big Picture put up an excerpt from his forthcoming book, Endgame. The excerpt is excellent, which is par for the course with Mauldin. I do plan on buying and reading his book. The phenomena he describes in his excerpt smack a bit of the Cowenian concept of "The Great Stagnation." (Mauldin calls it "the great immoderation," and wisely avoids capital letters.)

It will be interesting to see where Mauldin takes this concept in his book. Judging by his blog, I'd say he stops at making the point of lower public debt, saner regulations, lower spending. Basically, all the "home run" concepts that (I think) we all agree on. From the looks of it, though, I think Mauldin's book will fail in its endeavor to kick start important conversations simply because it's too smart.

Cowen can rake in good money selling what amounts to an e-pamphlet using simple language and concepts to call for more parental focus on science. These are easy, feel-good answers that don't really go anywhere but give us all a moral "way out" while costing us absolutely nothing. (No wonder leftists love it!) Mauldin, with his comprehensive charts and talk about futures and price volatility doesn't stand a chance.

All this is just one example of a question that has dominated my thoughts tonight: Why do we insist on lying to ourselves? Why do we think ignoring a problem gets us off the hook?

Folks, you simply cannot lie your way out of conflict. You can't lie to others, and you can't lie to yourself. For one thing, there is a lack of courage involved there. It's cowardly to hind behind lies - even to yourself - to brush aside some difficult thoughts.

It would be great if incentivizing little Johnny to become a math whiz could revolutionize the world; but that isn't going to happen. And what's worse is that Tyler Cowen knows it's not going to happen. So why pretend? Because it dulls the pain and gives us an easy way out. Every political success has that in common.

But the real problem here is that we in the USA have it so good that we're losing the drive to further innovate. We have most of our basic needs taken care of. The effort it takes to change the world is too much for most of us; and for the rest, they'd rather change the world with an easy answer than a hard one.

Similarly, if you have a personal conflict, you won't fix it by pretending that either (a) there is no problem, or (b) the problem is everyone else's fault, not your own. You can't lie your way out of it. You have to confront your reality. It's dishonest and cowardly to do otherwise.

I talk a lot about economics and politics on this blog, but all that stuff is really just a vehicle for a more important message that gets lost in the mix. This isn't about left, right, or center. This is about how we choose to live our lives. I'm never going to change the world, but if I stay true to my beliefs, I just my change my world.

It's easy to live an honest, courageous, and ethical life. Join me.

"Information Is Not Knowledge"

Way back in 1979, Frank Zappa released his epic Joe's Garage album, a 3-CD rock opera. Near the end, one of the characters expounds that "information is not knowledge." But still. Sometimes simply recording events as they occur lends such compelling insight into life that you can't help but question Zappa's hypothesis.

Case in point: the every-day statistics recorded by my friends the Kleparek brothers, David and Anton. There is nothing genius about their charts; they have simply recorded information about their lives in common home computer applications and presented the results graphically.

But what a story it tells! Here is David's body weight over the course of a year: 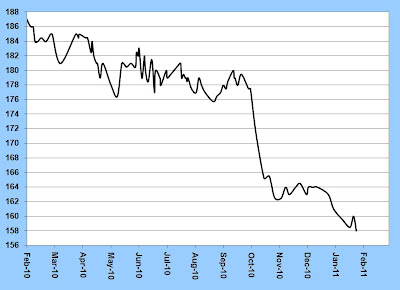 The big dip you see was a two-week fast he undertook. 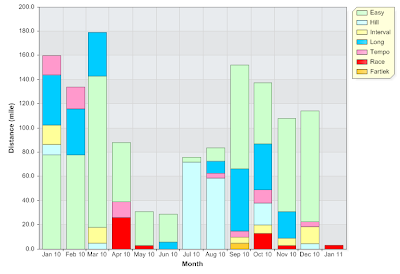 Feeling inspired by such a simple way to make life more interesting, I drew up a spreadsheet of my own, consisting of most of the biological statistics I can collect on a regular basis.

I'm going to have some fun with this. Over the coming months, my hope is to provide some charts, graphs, trends, numbers, and maybe even some hypothesis testing.

Caplan on Mathematics PhDs as a "Dead-End Job"

If you just did a double-take as you read the words "and Ph.Ds in mathematics," then you're not alone. In the comments stream, many people took the time to object to Caplan's conclusion. I myself dusted off my keyboard, rolled up my sleeves, and prepared to do the same.

But then I thought about it. Caplan didn't say "people who study mathematics," he said PhDs. Holding fast to this distinction, Caplan's point becomes crystal clear. Anyone who has taken the time to apply for jobs recently has likely noted the world of opportunity that awaits anyone with a degree in mathematics or statistics. But there are a lot of opportunities for holders of Bachelor degrees, and marginally fewer for those who hold Master's degrees. Finally, there are even fewer - marginally speaking - for math PhDs.

In other words, the return on investment for a math PhD is far lower than the ROI for a mathematics B.S. or M.S. Makes sense.

Maybe the phrase "Dead End" is a bit too much to describe mathematics PhDs, but I think Caplan's point is essentially a solid one.