Good heavens, it’s been nearly three years since I last compared Garmin’s proprietary “Training Status” to Strava’s “Fitness” metrics. Time sure flies when your blog is languishing in obscurity and suffering a long decay from neglect and the absence of anything really interesting to say. Or so I am told. My audience of Russian bots continues to grow exponentially, and many of you South Asian spam-bots seem quite secure in your belief that adding spam-comments to the bottom of my posts will gain you clicks and impressions. It’s not the world’s finest readership, damn it, but it’s my readership. And so, together, we will explore the depths of fitness tracking nerdery that only the likes of us can seem to tolerate.

Having been using these metrics literally for years, I think I have gained a better sense of how they perform with respect to their stated purpose. In my previous post, I compared them along more technical criteria: how are they calculated, what do they mean, etc. In this post, I’d like to instead discuss how it feels to use these metrics qualitatively. As a user – maybe even as a non-technical user – what is it like training every day while referring to these metrics and personally assessing what they mean, compared to how we subjectively feel on a day-to-day basis?

First, let me explain what my training has been like for the last little while. Having acquired an ankle injury, I have spent the past few months focusing on cycling instead of running. I’ve logged a few thousand miles on the bike, on rides ranging from a minimum of 15 miles to a maximum of 50. As I’ve trained, I’ve managed to increase my average speed from the 18mph range to 20-21mph. In December, I received a Peloton Bike as an early Christmas present, and I’ve already logged over 1,000 miles, using Peloton’s “Power Zone” spin classes to increase my FTP from a low and unknown number up to about 320. Not fabulous, but also not bad. On longer days, I use Peloton’s scenic rides to log miles at low aerobic efforts, and occasionally I’ll try to race other cyclists on the leaderboard to give myself an extra push. In short, my training has been a lot like it would have been if I had been running: I do lactate threshold training twice a week, a long day once a week, and aerobic rides the rest of the time. I’ve also taken on a 2-3 times weekly strength training routine to rehabilitate my ankle and increase my muscle mass. Finally, I’ve slowly started attempting to reincorporate running into my daily routine, taking things slowly so that I don’t rush into it and re-injure my ankle. All in all, I’m getting about two solid hours of daily exercise, usually quite vigorous. It’s a lot more hard work than most people do, at least for exercise.

Now let’s take a look at what Garmin’s metrics are telling me about the past 30 days of training: 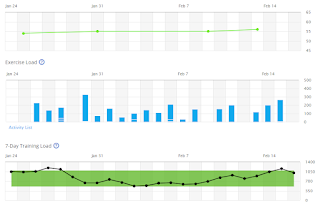 As you can see, my VO2-max has increased slightly, from 54 to 56. My Training Load started out “high” at the beginning of the 30-day period, dipped down toward the lower end of the optimal range, and then climbed back up to “high” again. Garmin’s “Training Status” metric over this same time period showed that I was “Productive” at the beginning of the period. Then, as my Training Load dipped, my Training Status moved to “Peaking,” which means that I was especially well-rested and ready for a big race or competition. As my Training Load continued to be in the low range, however, my Status flipped to “Unproductive” for a few days. Finally, as my Load returned to normal and my VO2-max kept improving, my Status once again returned to “Productive.”

Subjectively, I must confess that the readings on my Training Status report were very highly reflective of what it was like living through these past 30 days. I felt fit and in shape, and as my Training Load decreased, I had a burst of additional energy. I really did feel as though I was “peaking.” Eventually I knew I had to get back to working hard, and I feel productive again now. Garmin’s metrics seem to be getting it right.

What is Strava saying about my fitness over the same time period? 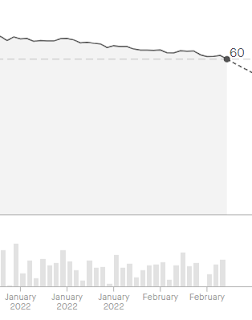 Well, Strava reports that my fitness is down. And it’s not just “down,” it’s down to a value of 60, which is relatively low, considering that I exercise for two solid hours a day and engage in the same kind of training – at the same level of exertion – that I did when I was running and when I was receiving a much higher fitness score from Strava (more to the tune of 85-90 points). There is no evidence of a decrease in training load, followed by an increase. We see only a steady decrease on Strava’s graph. It is, in short, not reflective at all of my fitness reality.

What could be going on here? Well, I mentioned in my three-year-old post that Strava’s Fitness metric seems to be biased toward time. In short, merely putting in a bunch of miles, no matter how hard you work or whether those miles are doing anything good for your body, will cause your Strava “Fitness” score to increase. Doing two hours of quality work a day will not do the trick. What gets me here, though, is that I have increased my FTP, my muscle mass, my weekly running miles, my estimated VO2-max, my cycling speed, and the number of pounds I lift while strength training. Basically, on every conceivable health metric, my fitness has improved over the last two or three months, and Strava is not only showing no improvement, it’s showing that my fitness level has actually decreased!

In short, Strava couldn’t have possibly gotten it any more wrong. Based on the above experience, and on my qualitative experience using these metrics over the past 3+ years, I have to conclude that Garmin has the better set of metrics. They do a better job of telling the user what is actually happening with his or her body, as it happens, and they seem to reflect genuine increases in fitness. Strava’s metric doesn’t appear to capture much, beyond time spent exercising. This is a significant weakness in their system.

In a day’s time, I hope to take delivery on a new Fenix 7 watch, which will include Garmin’s newest metrics, such as suggested workouts and “Body Battery.” I don’t know how well these metrics will work in practice, but I am hopeful that they will be about as good as what Garmin already offers. And when I find out for certain, I will make sure that all you Russian bots and spammers are the first to know how well it plays out for me. As I always do.