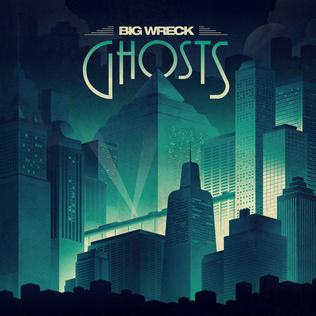 What many of us liked about Big Wreck's "Albatross" album was that it was a return to musical form for Ian Thornley: More rocking, more grooving, more screaming. It felt like 1997 all over again.

So think back to 1997's "In Loving Memory Of..." and then the years that followed. Big Wreck followed-up their debut album with something many orders of magnitude more eclectic and experimental with 2001's "The Pleasure and the Greed". Always billed as a reformed band of prog-rockers, Big Wreck finally hinted at that history on that second album, which featured many layers of guitars, contrapuntal instrumentation, odd time signatures, and extended instrumental passages. True, it wasn't a Dream Theater album, but at least the narrative made sense.

After 2001, though, the musical tides turned against them, and Big Wreck seemed to fade away, replaced by Ian Thornley's apparently more radio-focused solo career.

Even so, he seemed to leave hints at his uneasiness with radio-rock everywhere. Many of the lyrics on the "Come Again" album can be interpreted as expressing discontent with having to make pop music. Or is it just me? One bit of evidence in my favor are the "Come Again" demos that Thornley uploaded to his MySpace page a few years later. They were only available for a short while, but they demonstrated a far more hard-rock, and yes even a bit more of a progressive, inclination than what "Come Again" ended up sounding like. Again in the liner notes of the still-more-pop album "Tiny Pictures," Thornley thanked a friend for reminding him to rock, even as his music took a ligher turn. Well, the evidence seemed to be there for those of us who wanted to see it.

Then came the return of Big Wreck, with their "Albatross" album. As I mentioned before, it was a return to form. Once again, we heard those old hard-and-bluesy Big Wreck riffs. Ian Thornley was screaming again. He was even shredding, which was something we previously only got to enjoy from his live performances. This was the new Big Wreck, but in many ways it was the same Big Wreck that won our hearts over upon the release of their first album.

What's interesting about "Ghosts" is that it seems to have the same follow-up relationship to "Albatross" that "The Pleasure and the Greed" had to "In Loving Memory Of..." What I mean is, "Ghosts" is the more eclectic and progressive follow-up to "The Albatross." This is great news for me, since I always liked Big Wreck's second album better than their first.

"Ghosts," in particular, fuses together so many important aspects of the Ian Thornley oeuvre: There is the heaviness and the groove, as well as the soft melodic singer-songwriter vibe. We hear both the Zeppelin influence and the Bruce Cockburn influence. We hear the bluesy, slide guitar creativity evident on Thornley's earliest work, as well as the pop-focused hooks that were so pervasive on, for example, the "Tiny Pictures" album.

Indeed, what I like best about the "Ghosts" album is that it draws from all aspects of Ian Thornley's creative work. Any of these songs could have been found on his previous albums without sounding too different, and yet at the same time Big Wreck has managed to move the bar up a few notches: better guitar solos, stronger melodies, better production, nicer guitar tones, and so on. For my money, this is the best Big Wreck album yet. I had wondered how Ian Thornley was going to top "Albatross," because I love that album so much. Well, here's how.
Posted by RP Long at 9/18/2014 10:32:00 AM