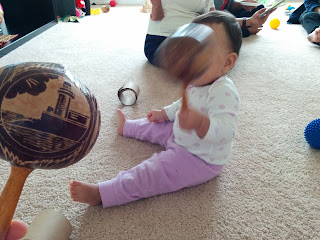 She didn't want me to leave this morning. Ordinarily, she can't wait to burst from my arms and into her mother's, to play, or for her morning meal, or just because. Today, though, she wrapped her arm tightly around my shoulder and just buried her face in my chest. Reluctantly, I handed her over to her mom so that I could collect my things and head out the door to work. She looked disappointed, and she fidgeted out of mom's arms and back into mine. This happened two or three times before I finally had to leave for work.

As painful as it is to have to leave for work when your baby daughter wants to just be with you, I have to take it as a good sign.

There is no discipline to be given during a child's first year of life, so parenting consists almost entirely of providing for all of her most basic needs: food, shelter, clean diapers, medical attention when necessary, et cetera. Enough has been written about that kind of thing that I will waste no time writing about it here.

For all the "hard work" and "life changes" people go through when they first become parents, for all the stress and trouble people like to obsess about when they think - and talk - and write - about parenting, there truly is only one important goal to have during the first twelve months, and that goal is to develop the foundation of a strong and trusting bond between parent and child. The closeness and intimacy we forge at the dawn of a child's life is what determines how we will communicate with each other for the rest of our lives.

This was the goal to which I have dedicated myself for the past 365 days.

I don't quite know how to put this, but I spent so many years believing that I didn't want children, and then ultimately only convinced myself that I wanted children on a purely intellectual level. But now that it's happening, it's real-world, in-the-moment emotional stuff, and what I am learning is surprising - I am really excited. People like to tell horror stories: "Prepare for your life to change," and "Say goodbye to your free time," and "As soon as you have kids, everything revolves around them," and that sort of thing. They make it sound like torture.

But I just feel like I'm about to get a new best friend who - if I can protect, advise, and encourage - will grow up to be a happy person whose smile makes the world a better place. Am I supposed to pine for the fact that I'll have to find a sitter if I want to spend the night having cocktails at a comedy club? If so, I don't really get it.

And that tells me that I am probably cut out for children, after all.

That's from a journal I kept of my thoughts and experiences during my wife's pregnancy and my earliest experiences as a new father. It is a strange experience, evolving from a man with no intentions of nurturing a child into a man whose every second thought seems to involve his daughter.

The passage written above was written during the first trimester of the pregnancy, yet already I had begun to develop a theory of parenting. That approach to parenting involved making space in my life for a new participant. As I put it the day after she was born,

My point was that, contrary to those who believe that "everything changes" and "life will never be the same," my theory involves simply inviting this fabulous little girl into the parts of my life I treasure most. While some dads might stop playing music when their children are born, I simply hand her a maraca and invite her to play along. Yes, it's different, but it's an improvement, in exactly the same way that marrying was a big change that made a big positive impact on my life.

I set out into my adulthood as a "lone ranger," and in my wife I met an equal partner. We now have a trusty sidekick. I didn't quite get it right a year ago when I wrote about this in my journal:


I have so far refused to adopt the kind of idiotic world-view that dominates the conversations that adults have with new- or prospective-parents. You know what I'm talking about, "Everything will change!" "You'll never sleep again!" "Get used to [insert bad thing parents blame on their own children here]!"

Here's what irritates me about that: It sounds resentful. It comes off like a bunch of adults who deeply resent the fact that they can no longer live self-absorbed lives because they must now devote the lion's share of their personal existence to the welfare of other human beings. It should be obvious to anyone who even thinks about the concept of having children that childbirth marks a life transition from the period in which you mattered most to the period in which someone else matters most.

What I should have said was something more along the lines of this: because she matters most to me, making her happy is how I will make myself happy. Early fatherhood isn't the end of your old life as a childless man; it's the transition of your life from providing for one to providing for many. As the many thrive, so does your own sense of happiness.

That is, if you're doing it right.

So you'll have to forgive me if I stroke my ego a little bit here. My daughter loves me. She holds me tightly and doesn't want me to leave the room. She loves playing with me, and learning about music from me, and learning new words and concepts from me. She loves it when I take her hiking, and she loves it when we stay inside and play with her toys. She loves it when I sing to her and when we have bath time together. She giggles when I try to make her laugh, and she lets out great, hearty laughter when she wants to make me laugh. If I take this as a sign that my first year as a father has been a success, that's only natural.

In the very beginning, my she wasn't much more than a little ball of need, but as the year progressed she grew into someone whose personality is genuinely charming to me. I love her love of the outdoors. I love her desire to make her parents laugh. I love the way she reaches out to other kids - even kids she doesn't know - in an effort to make them smile. I love that her reaction to her own fear is a timid smile, rather than tears. I love that when she's feeling ill, she valiantly tries to power through it - giving us, her parents smiles of encouragement - rather than expecting our pity.

Even at a year old, she has not only expressed her personality, but she has won us over as a valued member of the team, that trusty sidekick. Today, I don't know what I'd do without her. And that's just her first 365 days.

I should have known I'd feel this way about her, because the day after she was born, I wrote:

If there's one thing I would like my newborn daughter to know about [the day she was born], it's this: Your mother had the kind of fire in her eyes that day that could set the world aflame. That kind of determination is what summits Everests, builds multi-national companies, wins gold medals, cures disease, and otherwise furthers the path of human progress. This is the kind of person who gave birth to you; these genes are your genes; if you can channel the energy your mother has imparted to you through the miracle of genetics, nothing will ever stop you. You can achieve anything. That day, your birthday, your mother achieved everything....

It took nearly forty-eight solid hours of labor to bring you here. You were conceived in love and born into it. We will never stop loving you. I hope you live to see many moments such as the one your mother had when she conquered her pain and brought you into the world. You may not ultimately want children of your own, but I hope you give birth to many, many personal triumphs. You have your mother's eyes. May they forever sparkle like hers do.

One year old, and already I feel this way. I can only begin to imagine the depth of emotion that lies ahead of me as the years unfold.

Happy birthday, my sweet little nut. I love you.