The Impact Of Running On Heart Rate: A First Read

Now that I have a few months' worth of daily heart rate and running data available on Microsoft Health, I thought I would take a shallow dive into my numbers, purely for fun. The question I wanted to investigate is what impact running has on my heart health, as measured by my heart rate. So, I exported my data into an Excel spreadsheet and got to looking. 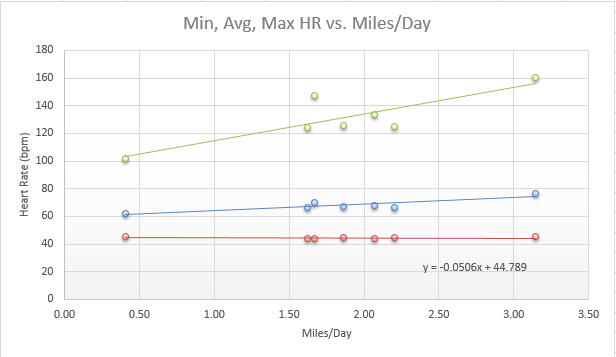 The blue series is Average HR, the green series is Max HR, and the red series is Min HR. I displayed the equation for the red series so that you could see that the slope of the line is negative, i.e. that minimum heart rate falls as miles-per-day increases, unlike the other two series.

Second of all, some caveats apply to the miles/day numbers. Some months have more days than others, some months are only partially complete (since August is far from over, and since I did not start using my Band 2 until partway through February, etc.). So it's not a totally fair comparison, but it's close enough for casual purposes here.

Third, the miles/day number is not an expression of how many miles I tend to run in one go, but rather the total number of miles logged in a month divided by the total number of days for which I have HR data for that month. So when I take a rest day, that brings down the average. On average, my runs tend to be between 3 and 6 miles, but I don't run every day, hence the numbers looking like they do.

Note that if you do this at home, you'll want to use the harmonic mean to find your average heart rate per month, not the arithmetic mean. There are technical reasons for this, but if you're not a math geek, you can just remember the simple rule of thumb that we use the harmonic mean for rates, just because.

So it's not Earth-shattering stuff, and there is obviously a lot more than just running that would affect heart rate, but in general my personal data can confirm the broad knowledge out there: