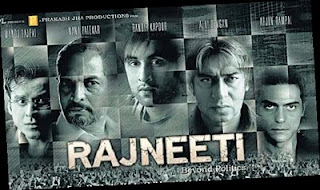 Last night I watched a film called Rajneeti the latest in what we can refer to as "Movies Dedicated to the Futility of Indian Politics." This one comes about a year after a much better film on the topic called Delhi 6. Unlike Delhi 6, however, Rajneeti places none of the blame on Indian society, but instead portrays the political world as a place of anything-goes, do-what-you-have-to-do back-stabbing. In perhaps the film's thesis statement, a veteran political advisor tells a political rookie and rival, "In politics, there are no right and wrong actions, there are only actions that serve an intended consequence, to be determined later."

And so the rest of the movie unfolds to highlight this point again and again. Virtually every character in the movie is shown to be a murderer. Some are also rapists, rackateers, and sociopaths. Nowhere is there a single respectable character in the entire film. And yet, somehow the filmmaker endeavors to make us care for the characters.

In yet another bizarre move, the film steers completely clear of actual political content, and instead focuses on a group of characters all vying for power. Other than a few hand-waving scenes that allude to "caring" for "the people," the actual political motives of the characters is taken to be beside the point. Those of you who have also seen the Hindi movie Corporate will notice that Rajveeti is essentially the same plot adopted to the political rather than the business world. The moral of the story in both movies seems to be futility of the common man.

But none of these films should be considered Kafkaesque by any stretch of the imagination. Kafka's explorations of human futility depicted and romanticized the emotions of those who have no hope in the face of a leviathan beyond their control. On the contrary, these Hindi films are glorifications of what is seen to be an unscrupulous - yet glamorous - world of the wealthy and powerful.

The same tragic cult of personality that promotes the blind following of political leaders and undermines everything about Indian politics and life in general is precisely the cult of personality being glorified by this movie. It's as if the filmmaker is completely self-unaware. Blind following is depicted to be both the problem and the solution. The masses are easily swayed from one murderer to the next based on each politician's scripted crocodile tears in response to the latest assassination - and the movie depicts this to be how things should be.

Truly, we are in a world without any kind of philosophical basis whatsoever, and the movie Rajneeti proves this in spades.