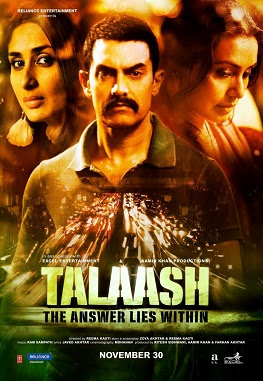 This past weekend, I finally got around to seeing the exciting new Hindi movie Talaash: The Answer Lies Within. It can safely be said that the movie lives up to all expectations. It is a great film!

But consider the expectations embedded in a movie like this. Amir Khan, the film's lead actor as well as its executive producer, is one of the most famous and celebrated actors in India. His production company churns out a seemingly endless string of hit movies, to be rivaled only by Amir Khan's only filmography. (Then again, there is some cross-pollination at play there.) Talaash's brilliant casting doesn't stop there, however. The two principle female leading roles are played by two of the biggest female names in Bollywood: Kareena Kapoor, who takes on a remarkably different-than-usual role as a prostitute, and Rani Mukerji, who has continued her transition from being a young, beautiful starlet to being a serious actress.

What else is new? you might ask. Bollywood movies routinely feature star-studded casts, and the twin-female-lead is a continuing trend in recent Hindi cinema. Talaash, however, ups the ante by piling on huge names behind the scenes, too. The film's song lyrics were written by lyrical legend Javed Akhtar. Akhtar's daughter Zoya - herself a celebratred director - co-wrote the script with with Reema Kagti, and Akhtar's son Farhan - a famous actor, director, and producer - wrote the dialogue and co-produced the film with Khan.

So Talaash has all the makings of a huge blockbuster. It all looks good on paper, but how does it translate to the screen?

Talaash tells the story of a brooding police investigator, Surjan (Amir Khan), probing the details of an unexplained car accident in Mumbai's red light district, killing a famous film actor. As Surjan uncovers more information, what at first appeared to be a freak accident is soon revealed to be a deep mystery touching all corners of Mumbai's seedy underbelly.

Given the twists involved in the plot, it would be wrong to reveal too many more plot details. The marketing machine behind Talaash went out of its way to preserve the mystery throught the film's promotional phase, and I won't undermine those efforts here.

What I can say is that Talaash continues Bollywood's steady march to cinematographic legitimacy. Watching the film affords the audience the experience of watching a fine foreign film, not merely "a Hindi movie." By that, I mean that the occasionally cringe-worthy cliches of Bollywood are well contained in Talaash, while the cinematography, acting, special effects, story and dialogue are all very much worth celebrating. Were I not reading English language subtitles throughout the film, I would have assumed I was watching the lastest Hollywood thriller, not a Hindi film.

I expect Talaash to fare well at the international film awards. Overall, it was excellent. I further expect that films of this caliber will begin making real waves on the interational scene as a broader trend from here on out. Hindi movies are not the quaint cinematic novelty they once were. They are arriving.