A recent video published by Runner’s World magazine shows ordinary people attempting to keep Eliud Kipchoge’s world-record marathon pace for just two hundred meters. When you click through to watch the video, you will see people stumbling and falling, collapsing beside the treadmill, flailing their arms in a futile attempt to keep the pace. You’ll see people lumbering and bounding with all of their might. Only a couple of people show even a hint of the grace and style that Kipchoge himself exhibits while running.


The difference between these two perspectives – wow, it’s impossible on the one hand, and anyone can do this if they try on the other hand – couldn’t be more stark, and it exemplifies the two different kinds of runners there are in the world. (More broadly, it highlights the two different kinds of people there are in the world, but I guess that’s another story.) Some people run like clowns, with goofy smiles on their faces because, hey, running is craaaazy! Look at me, folks, I’m crazy! I’m a runner! WOO!!! The other kind of person sees running as a challenge, a vehicle through which we can test and overcome our limits. It can be a little masochistic at times, but it’s nothing to clown around about. It’s just like any other individual sport.


As I’ve surely written before, the clown-runners have slowly overtaken the other runners in number and in influence in the sport of long-distance running. Who wins a race, and how fast they ran in order to win it, is information fit for an appendix or an epilogue. The real story, nowadays, is that we’re all trying our best! WOO!!!


You can easily see the corrosive influence of this attitude on the sport. It’s instructive to see the difference between the people in the photos of this retrospective of Atlanta’s Peachtree Road Race and these goofballs: 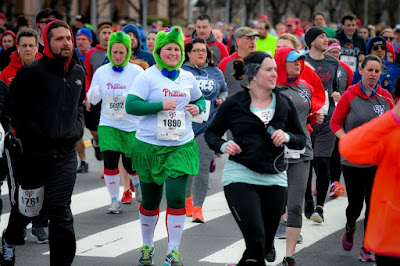 Is it any wonder that people today flail and stumble futilely while trying to run a 35-second 200? Maybe, just maybe, running is about more than participation. Maybe running is also about learning how to move your body quickly and safely.


When I see people struggling so hard to run a 200 meter dash, I’m not filled with awe over Kipchoge’s world record. (That fills me with awe all on its own.) Instead, I’m overcome with pity and with bewilderment that so many people who call themselves runners can’t sprint for 200 meters without flailing wildly. None of these people will ever set a world-record, of course, but after a couple of years of running, they should at least mastered the basics of a respectable runner’s gait. Flailing is what toddlers do when they try to run. Adults should have enough agility to be able to sprint without flailing. Whatever a person’s top speed is, and however slow it might be, it should be attained without the risk of falling flat on the ground and bouncing.


To some extent, this ties into the obesity epidemic. Most people are so overweight these days that it has become difficult to perceive healthy-weighted people as anything other than “too skinny.” Fat has become the norm. That’s a burgeoning health crisis that needs to be addressed, and so far, the best the running community has come up with has been to gently pad newcomers’ egos with proclamations about how the one and only thing that matters about running is participation. Never mind the fact that the average runner risks an injury or a fall simply by attempting a two-hundred meter sprint!


Imagine if other sports worked the same way. Imagine that your tennis coach told you not to worry so much about getting the ball inside the lines, that as long as you got out there and swung your racquet, you’re a winner. Imagine if a rock-climbing instructor downplayed the impact of unsafe climbing habits since, after all, the number one thing is to just get “out there.” Imagine if a football coach didn’t instruct his offensive line on how to take a hit safely, because those kids aren’t necessarily trying to make it to the Super Bowl, anyway. If any such people were your coaches, or coaches to your children, you’d understandably try to get them fired, either for being lousy coaches or for failing to teach their players about the basics of sports safety!


And so it is with running. The running community – coaches, friends, group run leaders, and so on – owe newcomers to the sport more than these people are getting. We owe our fellow runners a serious discussion about safe and efficient running form. We owe our fellows an introduction to sprint intervals, how to do it safely, how to do it effectively, how to ensure that your sprint looks different than your long-distance form, and in which ways they should be similar. We owe other runners our attention when they step to the awards podium, and we owe them applause when they win – not just when or because they cross the finish line, but when they win. We owe it to ourselves to recognize that fast running is praiseworthy, and that it is possible, if you set your mind to it. We owe it to future generations of runners that when they look at old photos of our road races, they see normal-looking people running as fast as they could, rather than clowns in silly costumes whooping and cheering for being craaaazy. WOO!!!


We owe it to our sport to keep it a sport. I hope you will join me.