I'm happy to report that I have marked improvement again this week. I've managed to bring Hell's Effervescence up to about 120bpm, while my continued work on Sextuplet Time and Strung Out have brought my speed on those exercises up to 88bpm and 138bpm, respectively. Recall that my original goal for Strung Out was 150bpm, so I am getting closer all the time. (My pie-in-the-sky dream for Sextuplet Time remains awfully elusive at this point, however.)

This week, I'd like for us to work on our groupings. These next two exercises seem simple at first, but getting the tempo and feel right can prove to be a challenge at higher speeds.

Exercise 4: Merge Without Blocking Traffic
We've all had to merge onto the freeway. The ramp is small, and we have to get up to speed quickly, but the real test of good driving is whether we can, once up to speed, merge into heavy traffic without slowing down or causing anyone else to slow down.

In the spirit of that disjointed, two-part endeavor, I have created Merge Without Blocking Traffic. The exercise is rather straight-forward. We begin with a 16-note ascending pattern. Once finished, we change time signatures to 3/4 and descend in the same note pattern via sextuplets.

Obviously, what's tricky about this one are the transitions. Here's what it looks like: 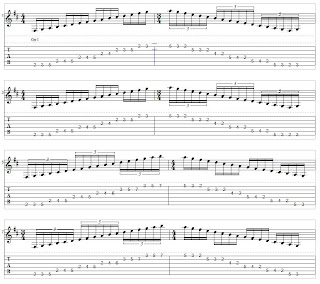 Exercise 5: Balance Beam
I call this next exercise Balance Beam because when one walks along a balance beam, it's not difficult at all... at first. A few steps later, you find you leaned a little too far to the right and have to compensate by leaning left; this again requires compensation by leaning to the right again. What was at first easy quickly spins out of control. One false move, and you lose your balance entirely, tumbling off the beam.

Similarly, the trick to this exercise is ensuring you never get too far ahead - nor too far behind - the beat. If you don't play it exactly, you may never catch up to the point where you're back "on" the beat. You'll have to start over.

The idea is this: play the world's most over-played 16th-note runs... but play them as sextuplets. Easy in principle, but a real challenge if you're gunning for accuracy.

Playing this exercise accurately at high speeds is one of the most impressive licks you'll ever master. I admit: I stole the 2nd measure from the guitar solo in Extreme's Get the Funk Out. While that solo gets a lot of attention for its near-impossible tapping arpeggios, this forgotten lick is the type of thing that sets people like Nuno Bettencourt and Warren DiMartini apart from the rest of the 80s guitar crowd.

Make sure you play the hammer-ons and pull-offs. Picking those notes is cheating. You'll cover up your mistakes with the sound of the pick attack. Mastering this as a combined legato-staccato lick is when you'll know you've really got it.