I'd like to give my diabetic readers some deeper insight into how things are going on the insulin pump. Recently, I wrote that things were not going well. I have had the opportunity to do a deeper dive into the data I collect on myself, and I have discovered some rather interesting facts. [Note: I have alluded to this data collection tool before; it has proven invaluable. At some point I must make a workable version available to you, the readers.]

Part One: A Look at the Data
Have a look at the following revised graph of my daily average blood glucose readings. 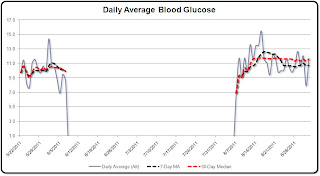 I should add a few interpretive notes. First, I failed at data collection during June and July. I had too many other things going on. Second, the climb in August is owing to the heat wave and its impact on the efficacy of my Humalog. Third, yesterday's significantly lower daily average is the result of my dedicated effort to bring down my average blood glucose. I am getting an extra 30 minutes of walking in every day. That's significant.

Aside from the massive hole in available data during the months of June and July, something obvious stands out from this data immediately:
Part Two: Some Introspection

My daily readings are all over the place. As I write this, my blood glucose is low: 3.3 mmol/L, immediately following my morning 15-minute walk. Before breakfast, it was 13.5, and two hours later, it was 12.0.

Bottom line: I am experiencing wide swings in blood glucose levels on the pump. This is incredibly uncomfortable and puts me at greater risk of neuropathy. My average readings were about the same on 4 injections per day, but it sure felt like my variation from day to day was lower.

And yet, the standard deviation of my blood glucose readings both over the last month and over the last week are lower than the total variation across all readings.

So am I merely imagining that I am in a state of discomfort? Am I actually in the same place I was before? It's a real puzzle.

Part Three: Pump Yea or Nay?
All the studies suggest that insulin pumps produce better control over blood glucose. I can tell you that nearly three weeks into the pump, I can't figure the darn thing out. I feel like I'm high one minute and low the next. I never feel like I'm actually "normal." I don't know how to treat my lows, I feel like eating snacks has a bigger impact on my body now that I'm using a pump. It's impossible to find the right balance.

Although, undeniably, my blood sugar is in better control since August 16th, and the walks I'm taking during the day are definitely bringing my blood sugar down, which means that I have some control, after all.

Whether the pump truly produces better control or whether a pump simply requires a person to watch their blood sugar obsessively and tweak things accordingly is the question. Does a pump help, or does a pump simply force a person to become hyper-vigilant?

More information, as it becomes available...

Email ThisBlogThis!Share to TwitterShare to FacebookShare to Pinterest
Labels: Diabetes