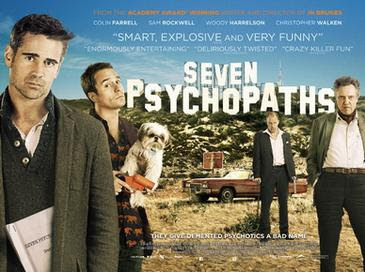 Like the movie poster above, Seven Psychopaths is a movie straight out of the late 1990s, offering little more than another send-up of irreverent-humor-and-brutal-violence. But despite a few good moments, a strong cast, and some very fine performances, the film falls short of the predecessors that built the genre.

Seven Psychopaths tells the story of a Hollywood film writer and possible alcoholic, Marty (Colin Farrell) who is unsuccessfully trying to write a film script entitled "Seven Psychopaths." Along the way, he is "helped" by his best friend, Billy (Sam Rockwell), whose possibly-well-intentioned endeavors to help Marty sober up and finish his script lead to various hijinx.

We, the audience, don't know very much about Billy. He may have a girlfriend. He may be an actor. What we do know is that he lives alone and spends his time stealing dogs from Hollywood denizens with his partner Hans (Christopher Walken), and then returning the dogs to their owners and claiming the reward money offered. The three men wind up in a world of trouble when Billy steals the dog of brutal gangster Charlie Costello (Woody Harrelson).

It is difficult to say much more about the plot of the film without giving away important spoilers, so I will try to avoid it.

What I will say is that, while movies like this were once seen as cutting edge - one could fit them in the same genre as the average Guy Ritchie or Quentin Tarantino film - there is something very by-the-numbers about these pictures now. The graphic violence is no longer a shocking counterpoint to the irreverent humor. The irreverent humor is, thanks to movies like Ted, no longer particularly irreverent. What we are left with is a film that wants desperately to be Reservoir Dogs or Kingpin, but instead feels like an episode of Miami Vice.

It's not all bad, of course. There is some strong writing during the first half of the film, and all-star cast delivers many excellent performances. Of particular note is Sam Rockwell, a remarkable actor whose compelling performance provides the backbone for the entire movie. This is really saying something, because it is rare to see someone out-shine Christopher Walken, particularly in a movie like this. Walken, for his part, delivers another strong performance, but his character feels better-suited to a man like Jack Palance. (Then again, who but Walken could be cast in such a role, now that Palance has long since left us?)

The strange thing about all of this is that Colin Farrell plays the lead role. His performance isn't weak, by any means, but this is the second major film release of the year for Farrell, and he has yet to knock one out of the park. His character certainly has a kind of softness not typically seen of a Farrell character, but the audience can't help but feel they're looking at Quaid from Total Recall all over again: A man with a strong jawline, squinting into the situation, unable to understand the events surrounding him. The character feels a little clunky sitting beside the others.

As I mentioned, however, the movie's major shortcoming is its anachronism. Gone are the days of Trainspotting and Lock, Stock, and Two Smoking Barrels. Pulp Fiction is nearly twenty years old. The blood-spattered and irreverent comedy genre has out-grown the likes of Seven Psychopaths and has frankly expired. The world of film has moved on. Watching this movie felt like I was staying up past 1:00 A.M. with HBO on in the background. Come to think of it, even HBO airs different material after 1:00 A.M. these days.

Don't get me wrong - I loved the late-90s. But they're over. This was a good movie, but the time for such films has come and gone.