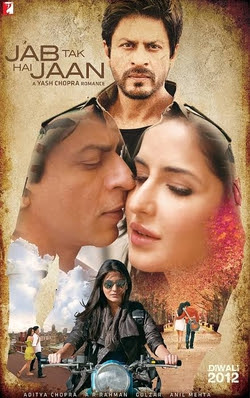 WARNING: This movie review may contain spoilers (although I do not think so).

Any movie that stars Shah Rukh Khan alongside two of the hottest working Indian actresses - Katrina Kaif and Anushka Sharma - and featuring a soundtrack written and performed by the legendary A.R. Rahman is bound to be interesting and wildly successful. But when that movie is also the last work of Bollywood legend Yash Chopra, released posthumously, you can bet it deserves some special attention.

So I am going to give some special attention to the rather remarkable new Hindi movie Jab Tak Hai Jaan. Truthfully, it deserves it. Not only do the aforementioned traits make it legendary before the opening credits roll, this happens to be the first genuinely surprising Hindi movie I think I have ever seen.

Surprising, because of its underlying message, a theme controversial in any country, but in India truly shocking.

Jab Tak Hai Jaan tells the story of Samar Anand, a wise-beyond-his-years, hardworking Indian every-man living and working in London, working two jobs and scraping together a living with his unemployed Pakistani roommate. Samar's life is difficult, but he gets through it happily with a forceful optimism and the wisdom of a real guru.

One day, Samar meets the beautiful Meera. A bit of an every-woman herself, Meera is a somewhat typical member of London's privileged Indian immigrant population, daughter to a highly successful corporate businessman, pampered throughout her life, and hoping to marry a handsome Englishman some day. Meera also has the habit of making deals with God. Whenever she wants something, she prays to God and asks for it, promising to give something up in return. All her life, Meera has gotten everything she ever wanted by dealing with God this way.

Next, a little classic Hindi cinema unfolds. Samar falls in love with Meera immediately, Meera insists on a friendship, the friendship blossoms into a great love affair... Because Meera is already engaged to a nice Englishman, she forces Samar to pray with her to God, asking him to punish them both if they "cross the line" into romance. Samar objects vehemently to this, but ultimately does it to satisfy Meera. When they inevitably do let their romance blossom and Meera breaks off her engagement, things go great, until Samar gets into a car accident. As the ambulance arrives, Meera swears to God that she will never see Samar again if God saves his life...

Samar lives. The rest of the movie depicts the aftermath of Meera's hasty deal with God.

Jab Tak Hai Jaan is a shocking movie in that its story is not at all friendly to God. The underlying message is that we should place our faith in each other, not in God. Samar wisely out-matches every other character in the movie who places their faith in God above all else.

And, to be clear, this message is underscored again and again in every scene of the movie. When one character says a little prayer before diving into a cold lake on a dare, she nearly drowns and must be saved by Samar. When Samar's roommate devotes his time to prayers and Koranic reading, Samar is busy outside working, making enough money to support them both. When Meera is praying for her and Samar to be apart, Samar is calmly and confidently embracing love between two human beings in the face of what Meera calls "her belief." Samar places himself in harrowing situations to save the lives of others, tempting God to strike him down, but his ingenuity and confidence in himself always sees him through - always.

One has to admire the unwavering consistency with which the movie drives this point home, from the beginning, all the way to the end. This is a movie about the childish shortcomings of letting faith rule your life with pointless sacrifice when love and joy are available to all those who will simply choose to take advantage of the opportunities they are given.

Throughout the movie, Samar is the wise one, the sane one, the good one, the hard-working one, who shows us that we can and will be happy if we work hard and stay true to ourselves and others. Meera is a coddled woman who has never had to work and never will, and who attributes this life of privilege to childish prayers she made to a God who surely has better things to do than worry about whether or not she will marry an appropriately rich Englishman.

The movie is not without its faults. In fact, the vast majority of the movie's second half is preposterously unrealistic and disappointing. I could hardly believe it was made by the same people who created the first half of the movie. Nevertheless, the movie's underlying theme remains consistent to the end, and for that I rate this movie good, but not great.