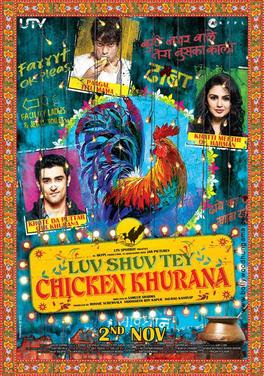 Hindi movies generally tend to be about rich, privileged Indian young people who travel to exotic locations and major world economic hubs to strike it rich and find love. The general pattern of these movies tends to be as follows:

The male protagonist - the hero - is a bit of a slacker, a no-good-nik, who doesn't take live or love seriously. He's still mentally in high school, "doing it all for the lulz," so to speak, but he's starting to reach the point in his life where he needs to get serious and focus on his career. Furthermore, it sure would be nice, according to his parents, to find some nice, well-mannered Indian girl and produce some babies. Then, one day, he meets a haughty-but-extremely-attractive young Indian girl, with whom he falls in love at first sight. She is typically a career-driven, modern woman who absolutely doesn't need a man. Or maybe she already has a nice boyfriend who looks very good on paper. At any rate, she's got her own thing going. She doesn't need the hero. He's a jerk. The rest of the movie tends to be about how the hero turns his life around and finds independent wealth and respect, all to win the heart of this fabulous young woman, who eventually falls for his new, more upstanding self.

When one becomes familiar with the genre, the fun about watching Hindi movies is no longer necessarily about any one movie's plot, but rather what plot-devices that particular movie employs in order to achieve the same result. It's sort of like becoming a wine connoisseur: It's all about the unique aspects of the wine you happen to be drinking, within a particular style. You will have had many bottles of Bordeaux, but each particular bottle has its own merits and demerits.

Considering all of that, it is especially refreshing when the core plot of a Hindi movie deviates substantially from the usual thing. Such is the case with Luv Shuv Tey Chicken Khurana.

A Movie About Normal People
Although it isn't obvious during the opening scene of the film, Luv Shuv Tey Chicken Khurana is fundamentally a film about ordinary people from rural India, not rich and glamorous playthings in the bustling cities. This immediately sets the film apart from most in the genre.

The movie tells the story of a young man, Omi (Kunal Kapoor), living "his dream" in London. His occupation isn't obvious. What we know about him is that he spends a lot of time drinking, womanizing, and stealing money in London night clubs. Then, one day, a brutal gangster walks in, beats him up, and demands repayment on a large sum of money Omi has apparently borrowed from him. The gangster sends Omi back to India to get the money from his family, only then can Omi return to London in order to "live his dream."

So, Omi returns home and the audience discovers, through a series of flashbacks, that Omi's family is somewhat poor. In order to get to London, Omi had to steal money from his grandfather and leave in the dead of night.

As you might predict, the bulk of the movie depicts Omi's internal struggle with confronting the fact that he is basically a "rascal," who has never done much for anyone, told through the plot devices of his trying to find the money to repay his debt to a London gangster.

The setting of the movie is absolutely gorgeous - but it is India, not some exotic world city. The beauty we see in the movie is the natural beauty of a small Indian city. Over the course of the movie, both the audience and Omi discover the beauty that they might not have seen before. That beauty is expressed in familial love, in personal ethics, in a picturesque landscape, and so on.

It's not a revolutionary message, but the story is well-told, the script is well-written, and the acting is superb. Despite a few cheesy moments, Luv Shuv Tey Chicken Khurana is a great movie with a good moral.