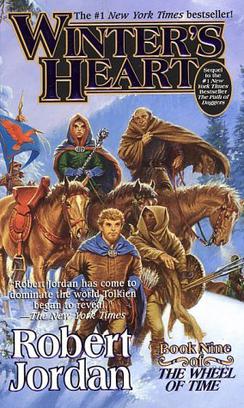 It took me much longer to finish Winter's Heart than it has to finish the prior novels in the "Wheel of Time" series thus far. The reason was that I have started losing the ambition to read the full series. Perhaps this is a simple matter of "binge fatigue," or perhaps it is because the novels themselves become less interesting as the series wears on.

While I cannot fault the author's prose, which always makes the reading pleasant, the major flaw in Winter's Heart is that I cannot tell you what the plot of the book is. This is because the plot of Winter's Heart is simply that it is a continuation of the previous novels. There is no final resolution in the novel, no beginning and no end. The novel begins by describing various events that occur to the series' main characters, and ends much the same way. In between, we are treated to many episodes of activity, none of which goes anywhere.

One of the strengths of a novel like this one is that the never-ending cliff-hangers keep you turning pages, waiting for more. Still, at this point the only reason I keep turning pages is because I know there are more books ahead of me. Had I chosen to read this book when it was first published, I would have been furious, absolutely furious. The fact that a reader can plod through nearly 800 pages of storytelling without a beginning-to-end plot is a terrible condemnation of Jordan's work.

Gone are the philosophical underpinnings of the story. Gone are the fantastical descriptions of mysterious, far-away places. Gone are the sword fights. Gone is the political intrigue. In place of all that, we have an unfolding of various events that neither build on what came before nor allude to what will come later. The prologue of the novel finds Rand plotting to rid saidin of its "taint," and across the subsequent seven hundred pages, we learn nothing of this. That part of the story does return… eventually… in the last 70 pages or so!

While previous installments of the series have felt like mere interludes, tiding the reader over until the next novel, this is the first in the series to dupe the reader completely. The reader is tricked into believing that the book is about a thing that is never addressed, never once, across 700 pages, until the very end. In between, we are treated to a few frustrations, but nothing so engaging as for me to be able to recall, ex post facto, that it happened at all.

The antagonists in the novel, "The Chosen," make only a few sporadic appearances. Well, some of them, anyway. Others seem to have disappeared. The ghastly creatures that played such a major part of the early books -- trollocs, myrdraal, ghrolm, and the like -- are nowhere to be seen here. In fact, those creatures haven't been in the series for three entire novels now. Why on earth did we learn so much about them in the early novels if they are to simply disappear for months on end, with no one having to worry about them?

Early in the series' first book, The Eye of the World, Rand acquires from his father a magic, heron-engraved sword that cannot be destroyed. This sword disappears after the series' third novel, never to return. In the meantime, Rand acquires another sword, but not a magic one, from a love interest, and carries that sword with him throughout the subsequent six books. This missing magic sword is emblematic of every problem with the "Wheel of Time" series. Time and again, important, compelling plot elements are simply dropped, never to appear again; in their place, we get lesser plot elements as thin replacements, trinkets that serve a thin purpose in the present novel, but which fail to do justice to a cohesive 14-book series.

In the end, I fear that Robert Jordan began an epic tale that he stretched too far to be great; he ended up with a serial instead, and fantasy readers are the worse for it.