Well, my friends, I am happy to report that my daily guitar exercises were extremely productive this week. I managed to bring "Sextuplet Time" up to a speed of 84bpm, and "Strung Out" up to a speed of 124bpm. I'm not done yet. I'll continue working on these every day until I get them up into the neighborhood where I want them.

That said, it's been a week, and it's time for something new. This week, I've developed something a little more complex, so rather than giving you two straight-forward exercises, I'd like to stick to just one killer.

Exercise 3: Hell's Effervescence
So named because playing this kind of technique reminds me of the bubbles in a boiling pot of water, this exercise combines several different aspects of guitar-playing theory into one brutal exercise.

Normally, exercises of this kind are played using a sweep-picking technique. Metalheads love this kind of stuff because it sounds evil, and it's also a "classic shred" kind of a sound. But do not use sweep-picking for this exercise. As you'll see from the diagram, our job is to play through the exercise using a combination of hammer-ons-from-nowhere and tapping. In other words, it's pure legato, baby!

This exercise was inspired first by Tony MacAlpine, who has a tendency to lay off his picking hand when he's doing sweep arpeggios. He plays them legato sometimes and merely pantomimes the sweep with his right hand. Hey, no harm, no foul. Another great example of arpeggios played as hammer-ons-from-nowhere are the fast bits in Extreme's "Play With Me."

But the best example of this I can think of is Joe Satriani's "The Mystical Potato-Head Groove Thing."

So, as you work your way through this exercise, work on the following:
As an added complication, I've written this exercise in the key of Eb. This will help get you out of the the whole E, A, D frame of mind and hopefully get you thinking about the notes you're playing, rather than just going on auto-pilot and playing the same arpeggios you've already done to death in other exercises. 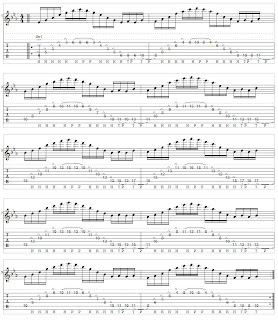