I recently borrowed this book from a cousin of mine, upon her recommendation: 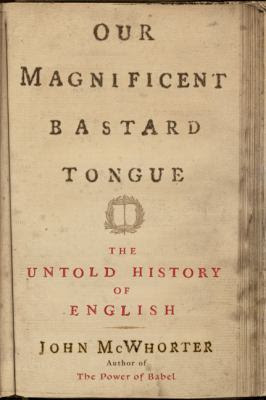 It was a decent piece of revisionist linguistic history. The arguments are well-reasoned, and the prose is nice. People with an affinity for language will like this book. More specifically, native English speakers who know at least a couple of foreign languages will have a good time reading this book.

First, the book is written at least at a high school reading level, perhaps even a junior high reading level. I realize that making the language a bit more intellectual would put it at risk of overflowing with technical jargon, but the simplicity of the language did not keep me engaged. What should have been a book read over the course of an afternoon ended up being drawn-out over the course of a couple of weeks, as I could only read it in short bouts before I lost interest.

Second, the citations were difficult to find and follow. Whereas more formal writing will cite references immediate and include footnotes or end notes, in this book McWhorter simply made his case and supplied a long appendix of sources at the end of the book. The sources were listed by chapter, but were otherwise out-of-context. People who are interested in citations at all would like to have them a bit more traceable than that. I suppose the author's or publisher's assumption is that the average reader of this book doesn't care about citations. Not so.

All the same, it was a good book with an interesting story. I especially liked the subtle use of adjectives in McWhorter's prose. When discussing German language, he tended to use German-based adjectives; when discussing French language, he tended to use French-based adjectives; and so on for Celtic, Sanskrit, and so forth. I consider these "Easter eggs" for people who have significant exposure to a variety of foreign languages and their influence on English. The "average person" would likely not pick up on this.