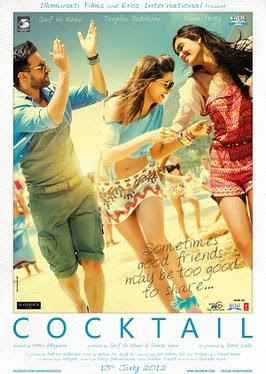 UPDATE: Apparently, my plot synopsis contains spoilers. Do not read this if you haven't seen the movie.


The 2012 Hindi-language movie Cocktail is a new spin on several standard Bollywood themes: The buddy flick, the love triangle, coming of age, the moral threats to Indians who immigrate West, self-sacrifice, and personal redemption.


Meera (Diana Penty) is a young woman whose parents were defrauded into marrying her to an Indian man who only wanted her dowry. When she travels to the UK to meet him for the first time, he tells her to go away, promising to divorce her once her immigration paperwork is finalized. Out of money and with nowhere to go, Meera stumbles onto hard-partying, self-proclaimed "rich bitch" Veronica (Deepika Padukone), who nonchalantly offers Meera the spare room in her apartment. Deeply grateful and indebted, Meera sets about earning her keep by cooking and cleaning while she looks for a steady job in order to contribute to the rent.

Predictably, the comparatively more responsible Meera soon becomes a protective big-sister figure in the life of Veronica, whose self-destructive partying and loose morals grate against Meera's subcontinental ethics. Nonetheless, the two become fast and inseparable friends who soon spend every available minute together.

When the two friends play a prank on womanizing Gautam (Saif Ali Khan) in revenge for an embarrassing romantic pass on Meera, Gautam and Veronica strike up a causal sexual relationship that neither of them take seriously. While this initially upsets Meera, Gautam and Veronica's relationship gradually grows tighter and soon all three have become good - if unlikely - friends.

That sets the stage for the rest of the film. Gautam and Veronica are drawn together by their loose morals, while each are individually drawn to Meera out of personal friendship. When Gautam's mother surprises him with a visit, Gautam lies and tells her that the mother-approved Meera is his girlfriend, not Veronica. Over the course of his mother's visit, Gautam finds he no longer has to pretend, as he genuinely falls in love with Meera.

Meera also falls in love with Gautam, but feels the love is a betrayal of her friendship with Veronica. When Gautam and Meera confess their love for each other to Veronica, Veronica is initially happy for them, but soon slides into depression and obsession, driving all three friends apart.

Will the friendship be reconciled? Which lucky lady will get to call Gautam her own? Will Gautam's mother approve of the choice?

While Cocktail's plot is superficial when synopsized, it is a solid movie with some excellent dialogue and a truly excellent performance by Mr. Khan. Padukone gets to flex her acting chops also, but her character is much more thinly developed than her character in, say Love Aaj Kaal. Penty produces a memorable performance, if a little too steeped in the stern and moralizing gaze of the Indian middle class.

All told, the movie is very entertaining and well worth watching. Just don't expect to be blown away by metaphor. Cocktail is a standard Bollywood melodrama aimed at the hip Western-dwelling subcontinental urbanite crowd. It hits the mark easily, though scores no extra credit points. I give it a solid A-.