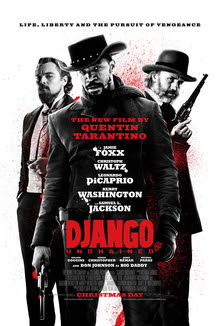 So much has been made of Quentin Tarantino's use of the N-word in his new movie, Django Unchained, that I feel compelled to begin my review of the film by addressing this point. (For one point of reference see The Crimson Reach.)

...Is some use of the word highly inappropriate and extremely offensive? Yes.

Let's put something in perspective here. And let me also preface these remarks with the fact that, as a white person, I am not necessarily the most qualified person to speak on the N-word. In fact, some would argue that I am not at all qualified to discuss it. If you have that perspective, that is fair enough. I readily concede that my experience as a member of a visible majority makes me ill-suited to dictate what is "fair use" of racially charged language and what is not.

But the fact of the matter is that Quentin Tarantino is an infamously controversial filmmaker. If you walk into a QT film expecting nothing but great plot and stellar performances, then you are being naive. From the very beginning, Tarantino has specialized in telling stories featuring offensive plot devices and dialogue, graphic violence, gratuitous nudity, and so on.

This, frankly, is part of what makes Quentin Tarantino such a great filmmaker. Not content to deal in ideal types, Tarantino tends to mix unrealistic stories with characters that display a sort of glamorized realism; realism insofar as no human being in any situation is perfectly true to what makes the hero in a story "good" or "evil." Invariably, human beings are sometimes good and sometimes bad. We endeavor to do the right (most of us, anyway), and that endeavor can frequently lead us to morally questionable decisions.

So it is with Tarantino's characters, and so it is with Django Unchained. What makes it so controversial in this case is the fact that American slavery is still largely taboo on this level. Typical depictions of slavery involve unambiguously evil slave owners terrorizing unambiguously innocent slaves. To tell it any other way would be to risk providing justifications for slavery: "See? This slave was a bad man... he deserved it..." And such a thought is beyond unthinkable; it is morally reprehensible.

To that end, Tarantino enlists the help of German folklore. Rather than Christ or Abraham Lincoln, Tarantino's Django (played by Jamie Foxx) is an American Siegfried, fighting to rescue his American Brumhilda. He scales a mountain, slays a dragon, and walks through hell-fire for the sake of his imprisoned princess.

Without spoiling the plot, I leave you with a few thoughts...

First, I think this is Tarantino's best film yet. The plot is a bit more believable than, say, Kill Bill, but still manages to capture all the classic flair and flamboyance of his oevre. The performances are truly stunning, most notably Christoph Waltz as a German immigrant/bounty hunter, and Leonardo DiCaprio as perhaps the most callously evil slave-owner ever depicted on film. And the show-stopper is a monologue delivered by Samuel L. Jackson, his eyes looking straight into the camera, as he describes the hellish fate of a slave working for a 19th Century mining company.

Second, I am empathetic to Spike Lee's criticism of the film. While I thought the treatment of slavery and the language used was as "tasteful" as any Tarantino film is capable of being, there is something remarkably sickening about being in a theater full of white people laughing their heads off as Samuel L. Jackson repeatedly uses the N-word in a decidedly derogatory manner. That aspect of seeing this movie was a true testament to the fact that the best aspects of this movie, and its subtler statements about racism and slavery in America, are lost on "the average Joe." And true to form, the average Joe will laugh stupidly and ignorantly at whatever he does not fully understand.

I am tempted to say that America is still not yet ready for a film like this, but the fact of the matter is that the ignorant masses have always been ignorant masses, and always will be. This film is an intellectual one. Intellectual points will always be lost on those who refuse to be intellectual.

Therefore, I highly recommend this movie, but suggest that it will be best enjoyed in the privacy of your own home, away from an audience that at times displays a nauseating degree of stupidity. And this does highlight the risk of using gratuitous sex, violence, and language to make a point. On the one hand, you gain the benefits associated with shocking literary devices. On the other hand, there are ignorami in the world who will be attracted to your work purely for its shock value.