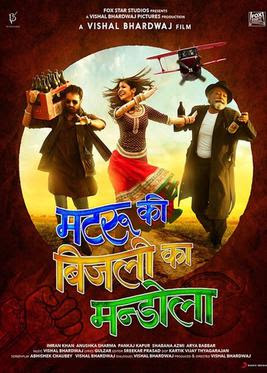 I took the opportunity of having a long weekend to make the drive out to the nice theater that plays Hindi-language movies (contrast to the lousy theater that plays Hindi-language movies). I couldn't wait to see Matru Ki Bijlee Ka Mandola in the theaters, because it is a big-budget movie featuring two of my favorite actors in the lead roles: Imran Khan and Anushka Sharma.

Unfortunately, as we learn time and time again, casting two fantastic actors is not sufficient to make for a great movie. While I did enjoy Matru Ki Bijlee Ka Mandola, it fell far short of my expectations. It was, nevertheless, a good movie.

The movie begins by depicting some of the drunken antics of local bigwig Harry Mandola (played by Pankaj Kapur), a corrupt businessman, landowner, and incorrigible alcoholic. As his mischief unfolds, we learn that he owns all of the farmland that the local villagers farm, and that his dream is to convert this huge expanse of agricultural land into a modern metropolis, full of factories, shopping malls, and high-rise apartments.

Of course, building a huge subdivision on top of an enormous expanse of wheat fields will mean the end of the villagers' livelihoods, so we are not surprised to discover deep resentment and political unrest among those villagers. Aiding them in their fight for land ownership is Hukkam Singh Matru (Imran Khan), who works as Mandola's personal assistant ("servant," in Hukkam's telling of it) by day, and moonlights as a crafty political dissident and public organizer who goes incognito by the pseudonym "Mao Tse Tung." Matru, trained as a lawyer, fights the villagers legal battles while keeping a close watch on Mandola from the inside.

The final element to the story is the inevitable Bollywood romance. Mandola's daughter, Bijlee (Anushka Sharma), is to be wed to the son of the corrupt politician who is helping Mandola in his plot, for mutual benefit. Naturally, the marriage is more about the ambitions of the parents than it is about the love of the children. Nevertheless, Bijlee commits herself to loving Baadal (Arya Babbar), even though, deep-down, she understands that she does not really love him. Matru sees this easily, and while he and Bijlee are first at each other's throats, their romance begins to blossom as they discover more and more about each other over the course of the movie.

The most striking thing about this movie is that, by Hindi standards, the plot is remarkably complex. The complexity is not so much about many twists-and-turns as it is about nuanced characters and parallel storylines set amid a real-world backdrop. The script is incredibly well-written. While many Hindi movies bite off far too much and leave many of the plot strings dangling unsatisfactorily, Matru Ki Bijlee Ka Mandola really does wrap up all its loose ends, and does so without the often cheesy and unrealistic liberties taken in most Hindi films.

Indeed, unlike most Bollywood films, this one deftly avoids the trappings of cheap melodrama. The good characters are flawed in realistic ways. The bad characters are more than just pure, ridiculous evil - they are also human, with redeeming human qualities, too.

Of course, not every aspect of the film is good. Much of the film revolves around Harry Mandola's alcoholism. While this aspect of the movie was, in my opinion, quite well-depicted, I felt that the writers too-often regressed to cheap slapstick humor. A drunk is indeed a stumbling buffoon, but this is no laughing matter. All alcoholics see their fair share of "pink buffaloes," but this is no real source of comic relief. As I heard the audience in the theater bellow out their laughter at the various drunken antics displayed, I couldn't help but feel that the filmmakers had perhaps focused too much on humor and not enough on the seriousness of alcoholism.

Then again, cinematic treatments of alcoholism have always danced between tragedy and comedy, and this film is no different. Perhaps this reflects the nuanced reality of substance abuse.

By putting Marxism front-and-center in the villagers' struggle, the writers fail to do justice to the intricacies of real-world poverty. Why, for example, would building factories and modernizing the village be bad for the villagers? The script suffers from an unjust romanticism toward traditional Indian life, unnecessarily casting the antagonists - most notably Harry Mandola - as greedy, evil scumbags. The truth is, modernizing a poor village is equally as noble a goal as fighting for political independence and land ownership.

That said, I would be asking too much of a script writer to demand that he do justice to all sides of a political issue when the film is, at its core, more of a statement about political corruption than it is about Marxism or capitalism.

All said, Matru Ki Bijlee Ka Mandola is a good, solid film featuring some excellent acting and a surprisingly good script. I would not recommend this film for younger viewers, owing to some strong language (if you understand Hindi - it is sanitized quite a bit in the subtitles), and to its treatment of alcoholism. But it is a good, solid film that adult fans of Hindi cinema will really enjoy.