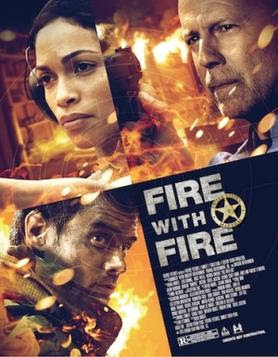 Fire With Fire tells the story of a California firefighter named Jeremy (Josh Duhamel), who witnesses a brutal double-homicide after work one day. We soon learn that the perpetrator is Hagan, a neo-nazi mafioso with no fear of law enforcement (Vincent D'Onofrio). Jeremy agrees to testify against Hagan, but must enter the Witness Relocation Program in order to survive long enough to do so. But the mafia eventually tracks him down and engages in an intimidation campaign to prevent him from testifying. Driven to the breaking point, Jeremy takes matters into his own hands in order to protect himself and those he loves. Vigilante-ism ensues.

As you can see, this is not exactly a "plot heavy" movie. Designed as a bit of a whiz-bang shoot-em-up, the movie delivers with plenty of blood and violence, plenty of action movie cliches, plenty of plot holes, and plenty of questionable moral stances.

But what really struck me about this film was the direction from which it appears to have been written. The hero is a firefighter with close ties to the local community, sexually promiscuous, and bereft of any real family. His fellow firefighters, all well-built and good-looking, clean-cut heroes in their own right, serve as Jeremy's surrogate family. The villain is a particular kind of evil man, too: He's a white supremacist. The supporting male role was played by Bruce Willis, a man with a history of sexually charged fillmmaking roles and frontal nudity.

What I'm hinting at is this: The whole movie strikes me as though it was written by someone who wanted to come up with a plot line that would appeal to every gay male stereotype in the book, only stopping short of making the protagonist himself a gay fire-fighter.

Now, I don't have a problem with this sort of thing, but at the end of the day, the appeal is a bit too narrow for my tastes, and it seems obvious that I was not this movie's intended demographic (which is apparently 15-year-old gay male teens). So it's no surprise that I do not think very highly of this film. That's not to say you won't enjoy it, of course, but you should know what you're getting into beforehand.