The internet is just full of great links this morning! Here's a sample of some interesting things I've been reading:


Allan Savory argued that while livestock may be part of the problem, they can also be an important part of the solution. He has demonstrated time and again in Africa, Australia and North and South America that, properly managed, they are essential to land restoration. With the right techniques, plant growth is lusher, the water table is higher, wildlife thrives, soil carbon increases and, surprisingly, perhaps four times as many cattle can be kept.

That is from this link, and Lubos Motl has more here.

Frances Woolley looks at negotiation usefully. Here it is in a single chart: 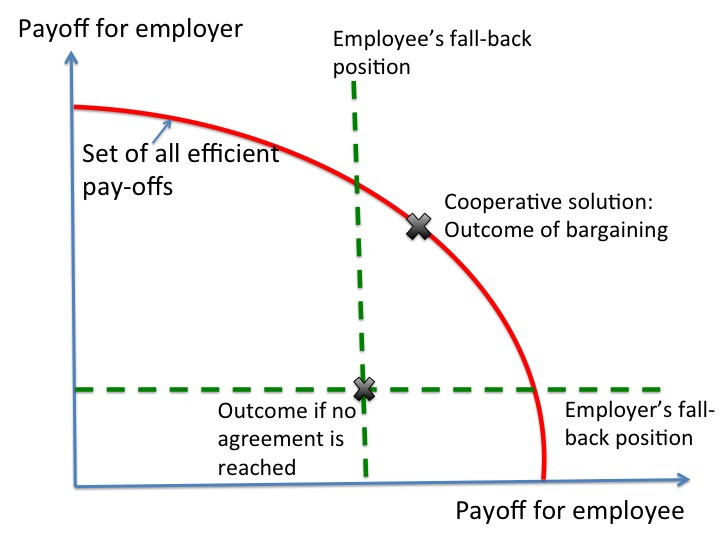 Those two links alone are worth the price of admission, but this morning, it's like Christmas in my Google Reader feed.

Next, Simon Grey gives us a remarkably insightful post describing how economic uncertainty becomes a list of "phantom jobs" that don't really exist. Anyone who has been in the job-search market recently knows that Grey is preaching the truth:

As a result, the jobs being advertised by major firms are more appropriately thought of as phantom jobs since filling the positions are generally viewed as risky.  Employers want to find the absolutely best candidate, so as to ensure that no money is wasted by hiring someone new.  What this means is that employers are interested in minimizing hiring and training costs (HR is basically a fixed cost, so having HR people jerk applicants around doesn’t really affect the bottom line while the extra costs of actually bringing a new employee aboard aren’t realized until the actual hire) and thus take their time hiring.  They make rescind the position if the macroeconomic data trends suggest that potential economic growth is diminished or negative.

These jobs are phantom jobs because their existence is contingent on improvements in macroeconomic trends and conditions.  If the economy doesn’t get better, employers will continue to delay hiring people.  If the economy gets worse, they may forego hiring altogether.  Thus, these jobs are mostly contingent on macroeconomic trends, which are themselves subject to government manipulation.  Therefore, the hiring freeze could be nothing more than unrealized government stimulus, which makes these jobs essentially fake, since economic stimulus is nothing more than a false signal of demand.

Finally, here's a note of housekeeping: Some of you may have noticed that the music videos have stopped coming on a weekly basis. I am knee-deep into recording a new rock vocal song for an upcoming DFW artist showcase CD. The core track is finished, only the vocals are left to record, and then some final mixing and it will be ready to submit for mastering. Details on how to acquire this CD will be provided as soon as they are available. In the meantime, you can expect the videos to start reappearing later this week.