The Soccer-Mom-ification Of Guitar Music 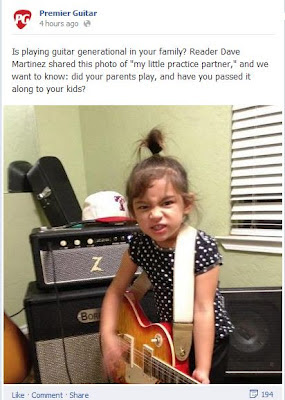 Note that the post has been shared 194 times as I write this. [ed. note: I started writing this blog post many months ago, so the number has almost certainly grown a great deal since then.]

While I think it is strictly a good thing to teach children about music - how to play it, how to appreciate it, how to create it - I must confess that my initial reaction to this post was extremely negative. I had to invest some time thinking about why I openly dislike this sort of thing.

The problem is not, as the reader is likely assuming, that there is something wrong with young children playing rock music. The problem runs much deeper than that, and strikes at the heart of what I feel is depleting society's sense of originality and artistic integrity.

Initial Disclaimer:
Those of you who are inclined to head-off every discussion about art and taste as "subjective" and refuse to probe the matter any deeper should probably stop reading this blog post. If you don't want to think about it, fine. But don't waste time remarking that "it's all subjective." We have a highly developed intellectual discipline that deals with this topic: aesthetics. This is a blog post covering a topic in aesthetics.

The Erosion Of Soccer As An Actual Game
Some time ago, there was a bit of a scandal in Ottawa when a local soccer league decided to stop keeping score for children's soccer games. The league officials felt that keeping score fostered unhealthy competition. In soccer, apparently, there can be no winners or losers, only participants. And if you participate to the best of your ability, then you're a "real" winner, regardless of the final score.

This kind of attitude represents what Bryan Caplan has called the Metaphorical Fallacy, which he describes as follows:
In the case of soccer, the league officials were using the metaphor that anyone who plays their best is a "winner" as a literal truth, that anyone who plays their best has in fact won the game. It is a waste of time to explain why this is an incorrect way of viewing the game of soccer, because it is plainly obvious: winning a soccer game litereally means out-scoring the opposing team, period, full-stop.

We may wish to debate the relative merits of keeping score during a soccer game with respect to its impact no the self-esteem of the young players. But we cannot dispute what winning actually is.

Art Also Has A Definition - Even If That Definition Is Personal
I readily concede that art and art appreciation are subjective preferences expressed by the individual doing the appreciation. Upon that fact, there can be no dispute. However, it is important to remember that just because values are subjective doesn't mean that values don't exist.

I make this point because it is far too common for people to torch every discussion of aesthetics by proclaiming "it's all subjective." This is tantamount to refusing to discuss which route to take when driving downtown simply because different people would choose different routes. Even if Peter would take the highway while Paul would prefer taking the back roads, if Peter and Paul are in the same vehicle, there is a more practical matter at stake than the mere expression of preference: namely, how are they going to get downtown?

Put another way, you can think of aesthetics as being the framework in which discussions of what art is actually takes place. We need not all agree about what is art, but if we can agree on a common language and set of concepts that describe art, then we can finally have a discussion about what we, individually, consider art.

Let's Begin Now
Now that we have some idea about how a conversation about the Soccer-Mom-ification of guitar music can unfold, let's get right to it.

Rock and roll has a certain aesthetic history involving rebellion, recklessness, rowdiness, and so forth. The picture shown above certainly acknowledges this lineage - after all, the little girl is making some sort of snarling "rock face." And yet, by the mere existence of such a picture, we see that rock music has been completely eviscerated of any true rebellion.

This is a tragedy. It's a tragedy any time an artistic movement becomes so predictable that it can no longer express the emotions it was designed to express. We have seen this many times over the centuries, and in fact we can probably expect it to happen to most forms of art. Abstract painting, for example, after its initial sensation, quickly became a source of ridicule, a springboard for criticism of not just art and artists, but of the art critics who elevated the act of reading too much into pictures to a previously inconceivable height of self-parody. Now, one can't produce an abstract painting without inspiring an aesthetic debate that is so tired that it has become "meta."

But there is something more disturbing about rock music's having become similarly nullified. Rock music and loud guitar playing is so emblematic of social rebellion, and has historically been so closely tied to protest culture itself, that turning one into a cartoon effectively cartoonizes the other. There is something particularly nauseating about seeing the glorification of mock rebellion reach this kind of ubiquity. What it comes down to is the castration of rebellion.

After all, the most important rock music innovations have always been described as "revolutionary." First came the revolution of 50s rockabilly. Then came the emotionally turbulent 1960s, and rock music's association with anti-war and anti-government protest. Then the technological and guitar-technique revolutions of the 70s. Then the "grunge" or "alternative" music revolution of the 80s/90s. For the full length of rock's history, we've been calling it a revolution.

Today, the revolution is placing a guitar in the hands of a child and watching the child mimic the caricature of a rebellion and revolution that will forever be unavailable to her, precisely because she is mimicking it.

Being a relatively young person with respect to rock music, I know this phenomenon very well. Consider what I mentioned the other day about how musicians today don't even play the music that appeals to them. Rock has baggage. Rock has expectations, rules, methods of attaining popularity. It is this baggage and these rules that drive the modern rock musician. He seeks neither revolution nor art, but simply popularity and stardom. He mimics and pantomimes according the script; he paints by numbers. He doesn't really want to get crazy or dangerous. He wants his YouTube video to go viral.

It's not that I oppose an artist's desire to reach a wide audience. I may not even fault someone for wanting to be a star (although I do think it is a rather strange aspiration). But whatever music that comes from that direction has no hope whatsoever of being "revolutionary." Your parents love it already. Churches use this stuff to bring people into the fold. Society has given it a stamp of approval and a glossy press photo that you can circulate among the restaurant owners so that they will book you to play "Brown Eyed Girl" for tuned-out diners.

Whatever that is, it's not a revolution. It's boring.

Conclusion
Maybe rock music is totally dead. That would not be such a tragedy, anyway. It had a good run and gave us many classic songs to love and sing for the rest of our lives.

The tragedy is that the rock sound is the medium through which modern musicians must innovate. There is no other option, because new options haven't been invented yet. In order to invent them, we must deviate from the norm. We must venture away from the rules of rock and roll, toward something altogether new and interesting, with its own set of rules and challenges. The tragedy, the underlying problem, is that we can never get there so long as we continue to teach our children to mimic and pantomime rather than (gasp) tune into their own minds and hearts and discover what they, individually, love about music.

When they find out what it is (through experimentation and self-reflection and generally playing around with music), chances are you are not going to like it. You will consider it noise. The notes used will sound jarring and harsh to you. The lyrical subject matter, if it exists at all, will bother you. It will not be your preferred choice of music.

The alternative is to stunt musical progress and reward our children not for creating something new, but for simply rehashing all the stuff that already exists. We can all become soccer moms for the musical world, but maybe we should re-think it. Maybe what we should be encouraging is a real artistic revolution.