As promised, today I am going to provide and discuss a couple of guitar-playing exercises to help you (read: me) develop your (read: my) technique on the instrument.

I said yesterday that I would likely be starting these exercises at about 140bpm and working my way into the 175 range. While that tends to be the case for solos that I write, which involve whole, half, quarter, eighth notes, etc., I discovered last night that these exercises should be played a lot slower, initially.

The reason for this is because, first of all, they involve only one kind of note (sextuplets in the first case, and sixteenth notes in the second case). This means that I have to push myself to maintain a constant speed. The second reason is that, as exercises, they are a bit more difficult than my solos tend to be.

At any rate, we are not doing anything incredibly difficult for week number one. I wanted to start out somewhat easy and work my way up, over the coming weeks.

Exercise 1: Sextuplet Time
Our first exercise today is based on... pretty much every metal shredder with a YouTube video. Nothing says speed and evil quite like shredded sextuplets in a minor key. For added dexterity, I have incorporated string skipping into the exercise as well.

For me, the descending part of this exercise is the most difficult part. You will have to move your fretting hand a lot more than during the ascension. In addition, if you're not holding the guitar in a comfortable position, with good posture, then you will find this one more difficult than it needs to be. Once you get it up to a nice speed, though, the picking hand starts to feel really good, and the notes really start to shine, despite the scalar nature of the exercise.

I started out at 50bpm during the "learning phase," in order to get a feel for how the exercise "felt." Over the course of a couple of hours, I worked my way up to 72bpm. Of course, the goal over the coming weeks is to play this exercise ridiculously fast. 165bpm would be nice, but that's pretty out-there for me at this juncture.

Here's how it works: 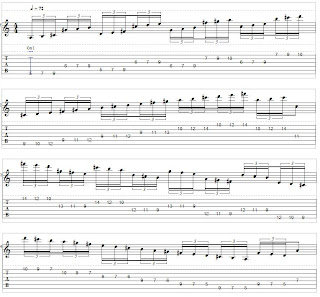 Remember, this is an alternate-picking exercise, so no cheating. Do not play this legato, do not use economy picking. You'll only thwart your own objectives in the long run.

Exercise 2: Strung Out
This next exercise is loosely based on something I saw in an interview with Yngwie Malmsteen, but it underlines a concept that is common to guitar-playing in general. The basic idea is to take a single note pattern on a single string and move it up and down the same string in either an ascending or descending pattern.

You can use phrases like this in solos as a convenient way to get from one location on the neck to another. Because it's based on a diatonic scale, it also has the convenient feature that once you're practiced through every conceivable pattern, you can play it in any scale without thinking too much about what you're playing. So it fits anywhere, over any chord; that's nice. Unfortunately, though, it also sounds quite cheesy.

What I like about this exercise is that the right hand and the left hand are moving almost independently of one another. All you really have to do with your picking hand is tremolo pick; after that, your fretting hand does the rest of the work. It also has a nice physical feel to it. Once you get it up to speed, the rhythm of the exercise takes on a completely different vibe in your mind. Try it out, you'll like it.

I started this one out at about 75bpm to get a feel for it, and worked my way up to 104bpm over the course of an hour. This one probably won't sound nice after a certain speed, but perhaps if I can get it up above 150bpm, I will feel satisfied. 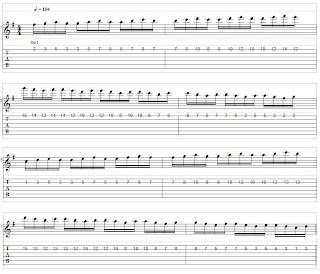