Apart from saying that most educational methods need to be dynamited, and replaced by learning-by-doing, there is nothing more I’m able to add. There are 1,001 specializations in the modern world and growing. At least 1,001 unique learning environments need to be developed. So far in the course of the industrial revolution, business has got away with the expense of education and gladly left it to the state. The result is that business is increasingly complaining of the sub-standard quality of school-leavers and graduates.

Well, what a pity! If nation-states can’t be prevailed upon to dynamite their educational methods, then business will have to start taking over — as indeed some large corporations are doing so already. Quod erat demonstrandum.

-- Keith Hudson, All Is Status

The economist's version of bankruptcy (not the lawyer's version) is simple: If what you contractually owe is (very likely) greater than the value of your assets, then you're bankrupt.  It's not primarily about missing a payment: It's about the prediction that you won't be able to repay everyone you've made promises to.  If your assets can't pay off all your debtholders (including depositors) then it's time to head to court.

-- Garrett Jones, on why bailouts are "totally unnecessary."

-- Tyler Cowen on yet another example of the Food God movement killing small businesses and reducing supply, all in the name of a ridiculous cult.

-- You just clicked this link, either in this universe or another one, but no matter what, you clicked it.

The sad fact is that most Americans right now do not believe they live in a police state, even though the New York Times openly discusses the fact that the president and his advisors have a secret list of Americans whom they are trying to kill with flying robots. I can’t believe I just typed that sentence, but I did, and it is true. As Jar-Jar Binks would ask, “Whensa yousa thinkin we’s in trouble?!”

-- Statements like this make me a regular reader of Robert Murphy's blog.

-- Sonic Charmer and Scott Sumner have competing takes on 47%. Charmer's is better. In light of this discussion, here is a graph of 2010 income distribution among the US population: 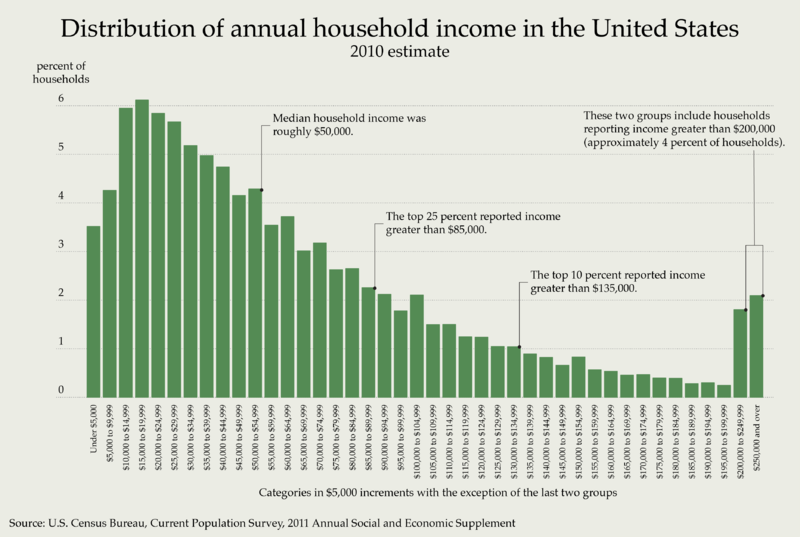