Lazear (and his coauthor James Speltzer) have investigated this “structural story” in more detail. Though referring to the skills-mismatch of the labor force (we might say its human capital structure), they investigate the employment situation across industrial sectors – the implication being that different industries require different skill-sets. (This carries its own set of structural assumptions – a kind of fixed production coefficient picture). It turns out that the dramatic rise in unemployment can be accounted for primarily by a few industries – the usual suspects from previous downturns – construction, manufacturing and retail. And when unemployment fell from 2009 to 2012, those same industries accounted for the majority of the change.

Emphasis mine. Unrelatedly, I happened to browse to Google News to see what the latest business headlines were... 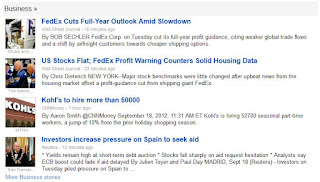 So what do we see? FedEx (shipping) cuts their forecast while Kohl's (retail) plans on going on a hiring spree.

Anecdotally, at least, it appears that Boettke is correct.