In predictable CNN style, on the eve of Father's Day, we find this article by Jeff Perlman, skewering bad fathers and touting Perlman's own fathering expertise.

The face-value of an article like this is what it is: the guy wants fathers to be good fathers, maaaaan...! The problem is, this article isn't face-value. There is far too much subtext here. The article doesn't mean what it really means. I'd like to take a moment to explore this.


As more than one reader noted in the comments section of the article, it is somewhat "typical" of CNN to publish an article like this on Father's Day, the one day a year we're supposed to be praising our fathers rather than shaming them into improving their act. Typical, because CNN tends to align itself with a stream of ideology that is more mother than father. I've lost all most all of you in saying so, so I had better prove my case by supplying some quotes:

In case you are wondering, I am that dad. The one who works out of the house. The one who drives his kids to school, packs lunches and pushes swings and arranges play dates and attends teacher conferences and -- generally speaking -- frequently finds himself alone in brightly colored rooms filled with women and tykes.

Here Perlman establishes himself as a guy who does all the "typical mother" things. No, not just "a" guy who does those things, but "that guy." In other words, he fancies himself as emblematic of the "kind of guy" who regularly and unabashedly engages in mothering behavior. Not that driving your kids to school is womanly, but what exactly does he mean by "frequently finds himself alone in brightly colored rooms filled with women and tykes?" Wait, there's more. Here he is, claiming to speak on behalf of mothers:

Hence, I have been sent here today, on behalf of the stay-at-home mothers of the world, to convey to my fellow pops a message of love and hope in this lead-up to Father's Day: Wake the hell up.

Play with dolls and paint your toenails: How many fathers do I know who refuse to get girlish with their girls? Dozens. Dude, put aside the machismo, break out Barbie and slather on some pink polish. You'll make a friend for life -- and nobody else is watching.

That's right, dads. If you don't "get girlish" with your girls, you're being a bad father! By now, it should be crystal clear that Jeff Perlman has no idea what it really means to be a father. To his credit, he seems to be really good at being a mother - but his fathering skills appear nowhere in his Father's Day article. Suspicious?

Perlman's manhood suffers its final death throes with this one-two punch: first "commandment" number one, then number six (emphasis mine):

1. No golf on weekends: Seriously, it's ludicrous. Your spouse is home with the kids all the time, and you think it's OK to take five hours on a weekend day to pursue your own pastime? Selfishness, thy name is Father.

6. Order the wife to bug off: I recently met a mother who told me her husband hadn't been alone with their 9-year-old daughter for more than two hours ... ever. Inexcusable. Let your wife do her own thing: relax, take a run, whatever.

What is Perlman doing?! What we have here is a bad case of a self-hating father. He knows nothing about fatherhood or manhood. His knee-jerk response is to behave as a mother instead. He calls fathers "selfish" for pursuing their own pastimes, and then openly encourages mothers to do the same. This blatant contradiction exposes the whole article as precisely the sick, sad ruse that it is.

Now, don't get me wrong - there are positive messages to be had here. It's important for fathers to be engaged. But Perlman doesn't make the case for that. Perlman makes the case for fathers' being more like mothers. This is preposterous.

Preposterous, because it is vitally important that children gain exposure to both roles. Children need heavy doses of testosterone and estrogen, in the right blend, depending on the particular situation. Encouraging the testosterone to behave more like the estrogen should never be misconstrued as good parenting.

What Do You Know, Ryan? You're Not a Dad
True, but I just so happen to have a fantastic dad. This guy was a lot of the things Jeff Perlman hates. He works all day, and when he comes home, he tends to watch TV. He spends a lot of time pursuing his own pastimes, and guess what: one of them is golf. When I was growing up, he used to golf nearly every weekend, sometimes two or even three times a weekend. When he wasn't doing that, he was tirelessly engaged in yard work or fixing things around the house. Perlman, if you're reading this, you may go grab a cup of milk and wipe your nose now. It'll be okay...

Because there is another side to fathers who behave as fathers. While mine was golfing and working outside, he was also telling jokes. He was turning everything into either a game or a song, or occasionally both. He taught me the value of hard work, but more importantly, he taught me that you don't have to dread every second of your life just because you have to work. He taught me how to play any sport I ever wanted to play (and several sports I had no interest in). He helped me with math and science problems. He gave me spy novels to read. He bought me toy guns and toy knives and real knives - and probably would have bought me a real gun, had I wanted one - even in an age when those things were already becoming politically incorrect. He helped contribute to my overall sense of values and my overall sense of self-worth.

And he never painted his toenails pink. 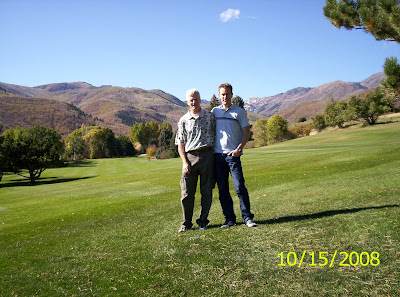 What's the Point?
The point is that society is rapidly losing its understanding of what a man's role is. Men like Jeff Perlman have adopted the perspective of women, because they think it is "feminist" of them to do so. It's not. (Think about it: do you really think men becoming women is a pro-woman stance?) Now our media is filled with images and words reprimanding men from doing all those uncouth masculine things like shooting guns and watching sports, and encouraging men to share the burden of motherhood...

Fathers tell dirty jokes when mothers aren't looking. Fathers sometimes swear - a lot. Fathers scare the crap out of you when you've done something wrong - because they're the tough ones, and you don't want to piss off someone who is tougher and bigger than you, even if he'd never lay a hand on you.

Friends, we're losing our fathers. They're getting old. Perlman notes that in a blink of an eye, your children have grown up and flown away. In that same blink of an eye, something happened to your father, too. Did you pay any attention?

Don't spit in his face by scorning the whole concept of fatherhood like a catty old hag. Man up. Be a father.