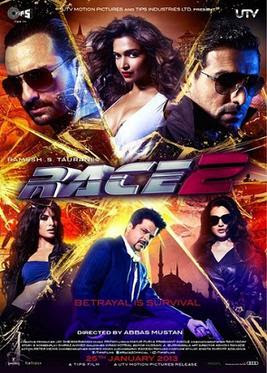 I watched the new hit Bollywood film Race 2 over the weekend, and I'm just getting around to writing the review now. This should already indicate to the attentive reader how well I liked the film.

Race 2 continues the story from the previous Race film. Like the prequel, Race 2 provides plenty of action, double-crossing, plot-twisting, and high-class heists. This time, there is a hefty dose of revenge injected into the film. The movie's plot is so thin that any additional details I provide will basically give the whole thing away. This is not a deep dive into the fine art of filmmaking. This is the shallow end of the Hindi film pool.

This is a difficult one to review, because, while I cannot pinpoint exactly what I hated about this film, I did hate it. Perhaps, as I just described, it boils down to the fact that there is not a whole lot to this film. It almost feels as though 45 minutes would have done it justice. Instead, it stretched on for two and half hours.

Let's begin with the female roles. While the basic modus operandi of female lead roles in Hindi films is to provide serious eye candy, and perhaps inject a little emotion-based reasoning into otherwise testosterone-fueled plots, the heroines in Race 2 were a bit too over-the-top. Their purpose in the movie seemed to be to provide, as Frank Zappa might say, "half a dozen provocative squats" apiece. There was no shortage of skimpy costumes and bathing suits - and who can object to that? - but it is always disappointing to see an actress as good as Deepika Padukone relegated to the role of a body with dialogue.

Not that expanding her role would have improved matters much. The dialogue in the film was so poorly written that even Hindi legend Anil Kapoor couldn't inject much life into it. Kapoor, as usual, outshined his fellow cast-members in a reprise of his fruit-eating character from the first Race film. Yet, where his character in the first film served as both comic relief and a final plot twist at the end, this time around, he was more of a buddy character, which feels inappropriate for an actor who commands the audience's attention whenever he appears on-screen.

So, if the best two actors in the film are confined to such a degree by poor writing, what can we expect of the films other characters? John Abraham and Saif-Ali Khan have obviously both been working out. Unfortunately, this is not a film about exercise. Abraham's character is ostensibly evil, but with Abraham's boyish features and comparatively weak acting, the character comes off a bit like a disgruntled teenager. And while Khan acts well, there is not much in the script for his character to do other than grimace.

What else can be said for Race 2? Not much. My recommendation: Avoid.