The classic peer pressure play is shared guilt. The way it works is stupidly simple. If a group of friends is hanging out, and a couple of them want to start doing drugs to pass the time, then they will go around convincing other people to do the drugs with them. I've been told this is because the experience is "more fun if everyone is in the same place you are." But the real reason is shared guilt. Doing drugs isn't wrong if everyone you know does drugs, too. This is also why legalization advocates spend so much time on drug normalization. (I addressed this to a certain extent here.)

But drug use is not the only arena in which shared guilt is deployed to make bad things seem like they're not so bad. Recently, the mormons issued an article disavowing their invidious historical doctrine of institutionalized racism. The amount of shared guilt in that document is staggering.


The Church of Jesus Christ of Latter-day Saints was restored amidst a highly contentious racial culture in which whites were afforded great privilege. In 1790, the U.S. Congress limited citizenship to “free white person[s].”4 Over the next half century, issues of race divided the country—while slave labor was legal in the more agrarian South, it was eventually banned in the more urbanized North. Even so, racial discrimination was widespread in the North as well as the South, and many states implemented laws banning interracial marriage.5 In 1857, the U.S. Supreme Court declared that blacks possessed “no rights which the white man was bound to respect.”6 A generation after the Civil War (1861–65) led to the end of slavery in the United States, the U.S. Supreme Court ruled that “separate but equal” facilities for blacks and whites were constitutional, a decision that legalized a host of public color barriers until the Court reversed itself in 1954.7

The document makes clear, if by implication, that the mormon religion's policies reflected the a perceived country-wide social norm. As the United States in general was guilty of racism, so, too was the mormon church specifically guilty of racism. The implication is that the racist doctrine of the mormon church, endorsed by its leaders in the name of Almighty God, was not a component of the actual religion, but rather a product of the cultural environment in America. It wasn't the church's problem, it was America's problem, and America is sorry, so the church is sorry, too.

It softens the blow, doesn't it? If we all carry a shared burden of racism, then the mormon church is not to carry any individual blame of its own. You, alright? They learned it by watching you!

It doesn't stop there, of course, and I'm not here to single-out mormons. Consider the distasteful supplication we saw from one Chris Taylor earlier this week as he attempted to excuse Barack Obama from taking selfies with pretty blonde diplomats during Nelson Mandela's funeral. Taylor, too, invokes shared guilt to excuse the president's obviously crass indulgence, describing the event as "a riot of colorful dancing and singing," and "a day for presidents and VIPs to take snaps of themselves."

A quick sidenote: those who committed genocide in Rwanda also liked to engage in colorful dancing and singing. Taylor's reasoning belies as poor an understanding of African culture as he does the importance of diplomatic social grace.

But back to shared guilt. Taylor is absolutely brimming with it. He writes (emphasis mine):


Thirdly, consider the context of the shot itself. In other photos, we can see the leaders joking around, switching seats, looking bored — all the things you might find it hard to avoid doing if you were stuck in a stadium for four hours. Danish PM Helle Thorning-Schmidt appears to have been the first one to crack and pull out her smartphone. We can relate.


Fourthly, and perhaps most importantly in this case, it was Thorning-Schmidt taking the picture. If a major European leader asked you to get in on a quick snapshot, it would be churlish (and diplomatically inept) to refuse — especially if the sober British Prime Minister David Cameron was already in on the fun.

Again, the implication here is shared guilt. It would be "churlish" to decline participating in the selfie because other people were doing it, too. Obama should have caved to peer pressure, and he did.

Taylor does not seem to consider the possibility that a more "churlish" and image-conscious Obama with a mind focused on paying his respects to Nelson Mandela could have saved all three of them from this embarrassment simply by quietly suggesting that they wait until they get outside to take the picture.

In fact, Taylor objects to image consciousness in this case. He writes, "Image may be king in politics, but it's high time that king was dethroned." He then posts the following photograph to make his case 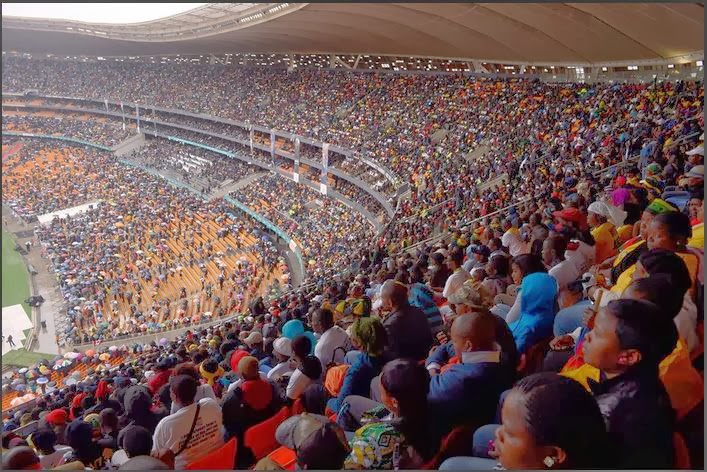 Notice how many in the audience are fiddling with their cell phones and taking selfies of this riot of singing and dancing.

Conclusion
It is human nature to surround oneself with people who agree with you, who will share your guilt and participate with you in your bad behavior to alleviate the guilt you would otherwise feel. One man's bad behavior is deplorable, but if it's everyone in the room, or everyone on your Facebook feed, or everyone in your political party, then suddenly all objections are "silly" or "churlish."

Unfortunately for people who like to sin in groups, morality is a function of an individual's own moral code, not a function of how many people are willing to engage in the same bad behavior you yourself would like to engage in. The mob does not determine right or wrong; you do.

Shared guilt is a deplorable act of hand-waving designed to get oneself off the hook for things that would otherwise strike at one's conscience. To act morally is to rise above such a petty appeal to the bandwagon. There is no shame in adhering to one's principles in defiance of the group.