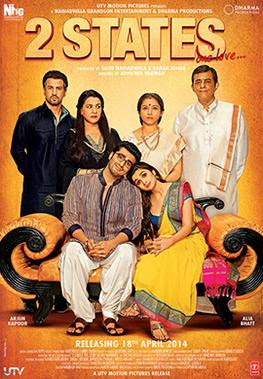 It's been a while since I've seen a Hindi film new enough to review, so I was excited to travel across the metroplex yesterday to catch a matinee of the excellent new film, 2 States.

Based on the 2009 Chetan Baghat novel of the same name, 2 States tells the story of two graduate students - Krish, a Punjabi (played by Arjun Kapoor), and Ananya, a Tamilian (played by Alia Bhatt) - who meet in university, fall in love, and then attempt to convince their culturally dissimilar families to consent to their "love marriage." That, in a single sentence, discloses the entire plot of the film. Ordinarily, I might consider such a simple story a drawback, but the film itself acknowledges its simplicity in a recurring theme throughout the dialogue of the movie. (I'd like to get more specific about that, but doing so would entail plot spoilers.)

At its core, 2 States is a movie about multiculturalism. While the writers did attempt, at the end of the movie, to broaden the scope of to love marriages in general, the movie is most effective as an honest depiction of what can happen when the parents of two fiancees from very different backgrounds attempt to overcome their traditional perspectives for the sake of a relationship that, for whatever reason, just works.

This theme resonated with me for obvious reasons. While my case involved hardly any conflict at all, the movie could be seen as a hyperbole of my reality. Parents who aren't used to how things are done in "the other culture" can and do say enough things to make the rest of us cringe. Each set of parents wants theirs to be the dominant culture - or, if not dominant, they at least want their culture to be fairly represented in the new household. But of course, this can never be. Mono-culture can't exist in a multicultural household, it simply cannot. The grandchildren will grow up with a blend of perspectives. They will neither "favor" one particular side, nor choose cultural attributes a la carte. The environment in which they grow up will shape their perspectives more than the combined knowledge of either set of grandparents.

Perhaps there is bound to be some concern or rejection experienced by parents who "lose" their child to a multicultural marriage, but they must put this out of their minds because culture is not something that an individual feels or experiences. Culture is a phenomenon that can only ever be observed among groups of people.

This might be what parents don't understand. Culture tends to disappear in a multicultural marriage, until outsiders, such as in-laws, insert it by force. My wife and I never have any conscious cultural conflicts. Occasionally we discover that we have to phrase things to each other in a different way, one that will resonate a little better. Other than that, we see each other as people, as equals, as members of the same "group," i.e. our household.

When outsiders force us to discuss cultural differences, they are mostly forcing us to resolve conflicts that do not exist between my wife and I. The outsiders imagine that X must be a conflict, and so talk to us about it. X is never a conflict. "Why not?" the outsiders often ask, and the answer is Because we just relate to each other as husband-and-wife, not as cultural ambassadors. This isn't satisfying to the ones who consider culture hugely important because it undermines the whole narrative. The narrative states that culture is a person's most treasured identity, one that presents conflicts with members of other cultures. When such a conflict doesn't arise, it's a hole in the theory.

It's not that my culture doesn't inform my point of view, it's simply that it's not my culture that relates to other people. It's my mind.

One of the things that makes 2 States such a great movie is that it highlights the fact that all the cultural conflicts that arise in a cross-cultural marriage arise from the spouses' collective desire to appease other people. When that isn't a concern, we relate to each other simply as individuals who are in love.

So it really is outsiders who make things painful for the married couple. Take that factor out of the equation, and it's just a normal, happy marriage.