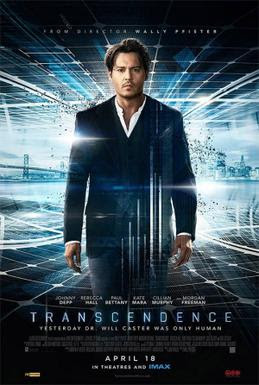 Hollywood occasionally attempts to appeal to more intelligent movie-goers by producing films that are intended to appeal to brainy people. The main problem with most of these movies is that actors, writers, and other artistic types are usually so far-removed from the world of science, mathematics, and logic that the attempts come off as worse than hackneyed. They feel like scripts written by precocious grade-schoolers who just heard the word "multiverse" or perhaps just finished a Madeleine L'Engle book.

So it is with Transcendence, a film about artificial intelligence that, in my opinion, wrote more than a few checks it simply couldn't cash.

The film tells the story of Will Caster, a genius engineer leading ground-breaking research in artificial intelligence. Caster and his colleagues believe that artificial intelligence represents the next major breakthrough in human evolution, but a hippy-ish terrorist group feels otherwise. When an assassination attempt leaves Caster with only a few weeks to live, his wife decides to "upload" his personality into a computer. The endeavor is a success, and the AI - which may or may not be the real Will Caster - becomes sentient and self-interested. With the help of Caster's wife, the AI builds a laboratory in the Nevada desert, where they are free to conduct breakthrough technological research and amass a small army of employees and solar panels. The advanced intelligence and computational power of Caster-cum-computer proves to be an eerie and invasive presence in the lives it touches, and as its relationship with the human beings around it starts to change, the movie's primary conflicts arise from the question of just who this computer really is, and what it really wants to accomplish.

The most immediate problem with Transcendence is that - yet again - Hollywood has chosen to insist that true genius always comes at the cost of social intelligence. The cool kids in L.A. simply can't be trusted to depict a character who is both a genius - intellectually superior to the L.A. arts crowd - and as cool and socially deft as the L.A. socialites.

A still more significant problem with Transcendence is the way technological advancement is portrayed: as a series of magic miracles and "major breakthroghs," rather than the slow march of scientific progress. The computerized Caster, free of the limitations of human intelligence, quickly figures out how to build human tissue from scratch and create solar panels from the soil. Its desert laboratory is a series of technological demonstrations. But in the real world, computerized minerals don't float through the air to do the bidding of a central processor, and no sentient computer would waste time and resources demonstrating scientific experiments the outcomes of which can be perfectly calculated in advance. Hollywood thinks science is magic, or at least they have no other way of depicting science, except as some kind of mystic miracle.

Worst of all, the writers of Transcendence don't even seem to have a good handle on human behavior. Humans are motivated not by the miracles of scientific accomplishment, but by pleasure-seeking and pain-avoidance. A super-computer equipped with a human mind would never waste its time on scientific advancement when it could spend its time like the infamous rhesus monkeys who starved to death because they preferred cocaine to food. A computer that can 3-D print human bodies and conjure up nano technology from thin air can and certainly would quickly solve its boredom problem, write a perpetual pleasure algorithm, and become worthless.

This, indeed, is the whole problem with ideas about "the singularity." Computers don't need to reproduce or think up solutions to complicated scientific problems. It's humans who seek those ends. All a computer needs to do is remain active and pleasured. As such, ideas about the singularity being anything other than a waste of time are, in my view, improbable.

There is not much in this movie that would appeal to nerds like me. And unless non-nerds hold a latent interest in the singularity - but not a strong enough one to actually inspire them to go learn about it - there is not much in Transcendence that will appeal to them, either. In short, it simply isn't a very good movie.

I was hoping for something more like The Lawnmower Man, but instead, I got a vapid and artistically drained attempt to reboot 12 Monkeys. My advice? Skip this one.