Our Need For Autonomy And Some Implications

In bygone ages, the toughest question anyone faced regularly was, "What do I have to do today to ensure that my family and I can eat and stay alive until tomorrow?" As our species has improved our ability to provide for ourselves, this question has become progressively less interesting. But human beings don't just stop thinking once we've solved a problem. Our insatiable minds relentlessly seek out new problems to solve. Hence, regardless of how you happen to feel about Maslow's Hierarchy of Needs, something very much like it is bound to be true of human psychology.

This was formally recognized by the old, pre-Samuelson economists like Ludwig von Mises (with whom I am most familiar, relative to others). People have needs and desires whose urgency corresponds to the immediacy with which we seek to satisfy them. It is as elementary as this: If you feel like eating, but you also want to play some basketball, you will choose your course of action based on how hungry you are. If the urge to eat is overwhelming, you'll opt first for food. If not, it's off to the b-ball court. This may seem pedantic to the point of absurdity, but it is through this very line of thinking that we arrive at things like demand curves and diminishing marginal utilities. That is to say, even if it rather elementary it is nonetheless highly profound. 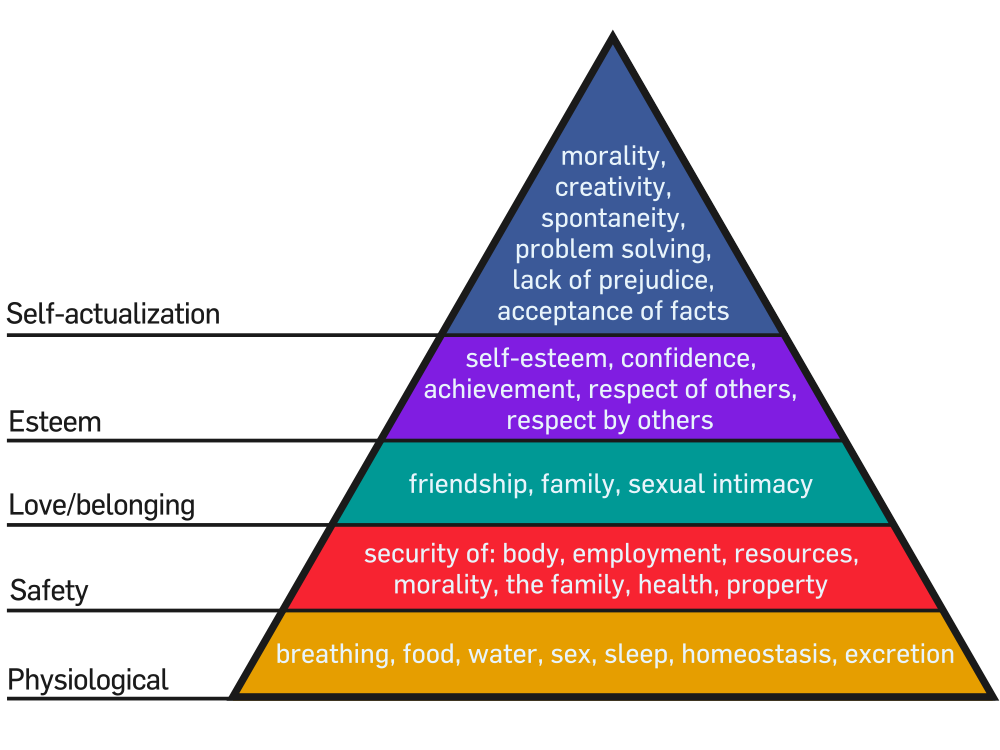 So, in Maslow's famous hierarchy, the tip of the pyramid - the highest and most final set of needs - consists of all the attributes of "self-actualization," such as morality, creativity, problem-solving, and so on.

These problems, however, were most famously explored by the Ancient Greeks, and we've been taking a crack at each one of these problems for nearly every second of our lives since then (and probably beforehand, too). For perhaps three thousand years - three eons - human beings have been grappling with the very apogee of the famous hierarchy of needs. This says to me that, if the hierarchy is to be seen as some sort of gauge of societal progress, one of two things must be true: Either society has not progressed much in three thousand years, or there is a higher level on the pyramid that Maslow hadn't yet identified.

I'm neither a psychologist, nor a sociologist, nor anyone particularly important really. But at the risk of a small stroke of vanity, I would like to propose a new tip to the pyramid: Autonomy.

Today, we seem to have managed to come to grips with self-actualization. This was no small feat, but also not out of the question in today's world. We have endless piles of technology helping us solve problems. Mass communication has enabled most of us to overcome prejudice (not that prejudice has been eradicated, of course, but society does seem to have provided social and psychological mechanisms for dealing with it in a healthy way). Morality and creativity have been explored for the past three thousand years, and we are now able to pursue both with relative ease... via mobile phone apps in many cases, for chrissakes.

Where we now seem to struggle most is with self-direction. In the health care sector, for example, the main frontier of medicine is tailoring (and even genetically synthesizing) health care solutions to the individual, i.e. having some self-direction when it comes to our bodies. In the political sphere, the major challenges around the world involve over-throwing despots and learning to function in systems that allow each of us to live our lives freely independently (whatever the particulars may happen to be, in your opinion). In the professional world, we grapple with managing our own careers, getting to the positions we want, and having some say in the day-to-day business operations. DIY is all over YouTube. We no longer reach for a cold Budweiser, but think long and hard about setting up a small micro-brewery in our own garages.

Make no mistake about it, the new frontier of human progress is autonomy, and how to achieve it without having to completely dismantle society itself. This brings me to my last set of points.

There will always be a trade-off between individuality and being part of a group. It is inevitable, and I have spent some time in the past arguing that humans are both individualistic and collectivistic. Getting elementary again: We all want to socialize and be a part of a good group of people; but we also have a set of personal needs and ambitions that we retain only for ourselves. Our goal here should be to balance our place in our community with staying true to our own individualistic integrity (or creed).

Our individualism may lead us to want to pursue some kind of economic ambition or a lifestyle choice that puts us at odds with the group. We might be inclinded to advocate that society change its ways to conform to us, rather than conforming to group pressure. This is a good thing when the cause is noble and fair, but a bad thing otherwise.

Thus, to achieve the right balance between autonomy and a well-functioning society, we need to practice some kind of restraint. I believe it's more than fair to pursue one's own personal ambitions relentlessly; but on an ethical level, we have to understand that society functions best when everyone collectively has the same leeway that each of us has individually. Respect for other people's autonomy becomes paramount here.

Perhaps there are two additional levels to the hierarchy of needs: Personal autonomy is the more immediate, and after that comes mutual respect for the autonomy of others; otherwise called social cohesion.