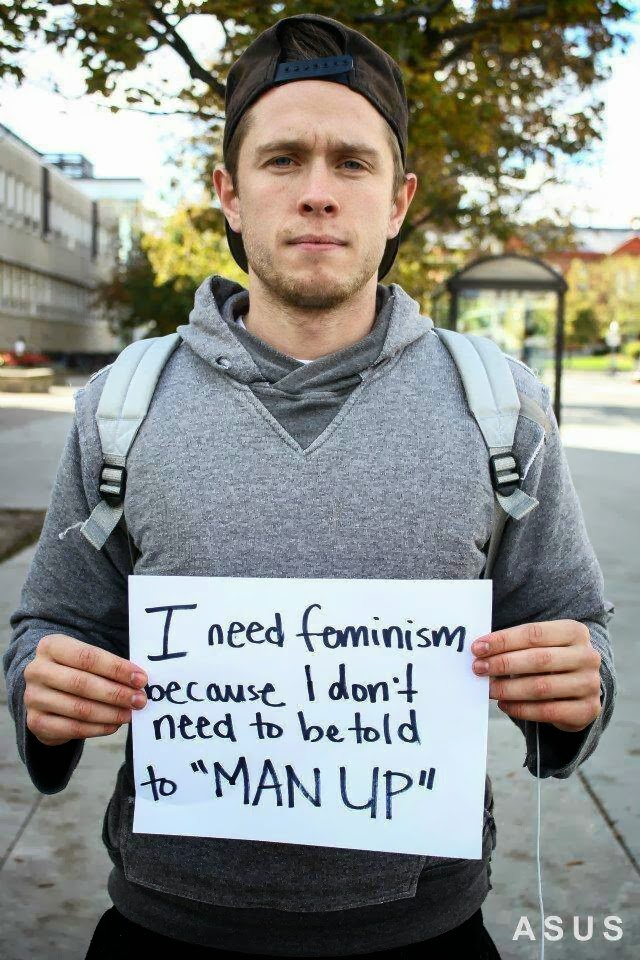 Near as I can tell, there are two interpretations of this photograph. The charitable one is that this young man doesn't need to be told to "man up" because he is already adequately manly.

Less charitably, the way I interpret the message of this photograph is that telling someone to "man up" is in and of itself offensive. Now, the reason I interpret it this way is because the message states that the young man "needs feminism" specifically. In other words, feminism is the idea that resolves the conflict created when he is told to "man up." This, in turn, could mean one of two additional things: Either feminism is the idea through which the young man gains relief from being told that manliness is a certain ideal to which he objects, or feminism is the direct source of his definition of manliness.

Neither of these explanations bode particularly well for a man's self-image. The first implies that behaving in a manly way is bad; the second implies that men are starting to define their gender identity through a conceptual paradigm designed to favor women.

Muscle Men
All is not cause for alarm, however. Recently The Atlantic published a story about the image of the male physical ideal as it evolved throughout the last century or so. What we learn from this story (among other things) is that the "muscle man" media ideal has existed for men since the turn of the century. Back then, it allegedly looked something like this:

These days, I'd argue that most men (or, at least, those who aspire to a media image ideal) aspire to be something more like this:

We can argue about the relative merits or demerits of any of these physical ideals if we want to. We can proceed to have a discussion about the pressures of media-driven imaging, I suppose. But doesn't that whole conversation come with a large dollup of feminism baked into it? What I mean is, if we proceed to have any discussion about how seriously men should aspire to look more like media images of the idealized male, aren't we really just bound to rehash the conversation that women have about media images of women?

In other words, what do men, specifically think about these male media images?

After all, the context of the feminist discussion of media images is one of "unattainable beauty." The controversy is that the media snaps photos of 14-year-old fashion models under the (alleged) false pretense that an adult female body "should" look like that of a 14-year-old Czech girl. Moreover, it is certainly true that a woman who aspired to make her body look like that of a young teenager would be attempting the impossible.

Interestingly, though, idealized male images - however superhuman they may appear to be (and Ronnie Coleman sometimes seems to possess superhuman athletic ability) - are always rooted in the idea that what you see is entirely attainable through good old-fashioned hard work. In other words, if you hit the gym, put in the hours, eat the right diet, and really try, there's no reason why you couldn't make yourself look a lot more like Ronnie Coleman than you currently do.

So the male physical ideal is all about the attainable. If a man fails to live up to the image the media is shoving down his throat, it mostly comes down to having either a bad work(out) ethic, or other, non-physical priorities.

What I'm getting at is that perhaps "the media" doesn't set our self-image so much as the sexes do themselves. This is obviously influenced by the images that surround us, but not necessarily defined by them. Regarding male image, the fact that we can't walk two blocks without stumbling into a gym with an active marketing department influences us insofar as we now know it is possible to hit the gym after work. At the turn of the century, it wouldn't be a gym, but it might be a local boxing tournament or something. But at any rate, the images tell us what's out there, while the desire to take on that particular activity is what moves us to aspire to that particular image.

I even do it, myself: I aspire to somewhat of a male image defined primarily by the tall, thin, muscular, graceful Kenyan 10K runners I have occasionally had the opportunity to see at big races. They're not scrawny like American marathoners, and they're not big like Ronnie Coleman. To me, they embody what the human body looks like at peak athletic performance. It's something that, aside from the height, I can look a lot like, myself, if I put in the hard work.

Conclusion
I'm not really sure what I'm trying to say in this post. Mostly I am just musing about masculinity and social expectations. I think it's a good thing to "man up." I think it's good to exemplify certain classically male attributes, like competitiveness, and jocularity, and firmness, and courage, and "toughness" or perhaps "impenetrability" in the sense that hostile outsiders can't "get to you."

Nor do I think that women ought to have a say in a man's aspirational self-image. I don't think it's feminism's right to tell me whether or not I should be upset with being told to "man up." I think men should determine this. And, for most part, I think they do determine this, without feminism's help, and without any help from women in general. This is entirely appropriate.

And I think the media has influenced the self-image of both men and women for a long time, but that it seems to me that women take this self-imaging a lot more seriously than men do. They own it a bit more, and they raise it to the level of the impossible to a greater extent than men do.