Most readers would agree that I have a particularly unique set of personal interests. A blog about "Economics, Fitness, Music, and Philosophy" doesn't always make sense to new readers. Any two of those things might make sense if put next to each other; all four seems uncomfortably eclectic. Somehow, in the haze of my own mental fog, it all makes sense; but even so, I realize it's a special blend.

Because of this, I get a big kick out of things that seem to be strangely tailored to my own personal idiosyncrasies. What are the odds? A perfect case-in-point is the newly released Bhaag Milkha Bhaag, a movie that combines two of my biggest interests: Hindi cinema and running.

To sweeten the deal even further, the movie stars the incomparable Farhan Akhtar and the always-good Sonam Kapoor. Akhtar specializes in making more dramatic and meaningful movies than many of his Bollywood contemporaries. He serves as a particularly serious contrast to, say, Shah Rukh Khan, who excels at the light-hearted. Akhtar always seems to lend his talents to movies with powerful, and often political, messages. And while his talents as a writer, director, producer, and of course an actor, are indisputable, he can often be serious to a fault. That is to say, an important message made in an artistic way is one thing; cramming an overbearing political diatribe down the throats of the escapist movie-going public is another thing entirely. Happily, Bhaag Milkha Bhaag falls far nearer to the first end of the spectrum.

The movie tells the (highly dramaticized) story of legendary 400m runner Milkha Singh, aka "The Flying Sikh." Singh's early life was marred by the Indian Partition of 1947, in which the British decided to carve up one of the world's great cosmopolitan civilizations into ethnic groups and distribute political power to those ethnic groups. Almost overnight, the region went from being a diverse, but largely cohesive, nation with a shared history and culture to being a region mired in ethnic conflict and violence. (For my comments on the Bangladesh side of this history, see this old post.) Singh, being a Sikh whose family had long since lived in what was suddenly declared the Islamic state of Pakistan, was forced to emigrate to India as a young boy.

Like many children whose early life is marked by violence, Singh grew into a bit of a trouble-maker and petty criminal. Also like many such children, he straightened his life out by joining the army, and it was there that he discovered his natural talent for running. The movie takes us deftly through Singh's early years and highlights his fascinating exploits and many great achievements as a runner.

Sports movies are always a challenge because, unless they are made by filmmakers who have an intimate knowledge of the sport they seek to portray, they can come off as hackneyed and superficial. Movies about running are particularly susceptible to this because, while running is a very popular activity, few people anywhere possess any real knowledge of what it is like as a sport.

What I mean is that lots of people like to run. If you read my blog, you're probably one of them. But most people appreciate running from the goofy, clownish, gee I'm so crazy because I like to run even though it hurts perspective encapsulated in photographs like this one: 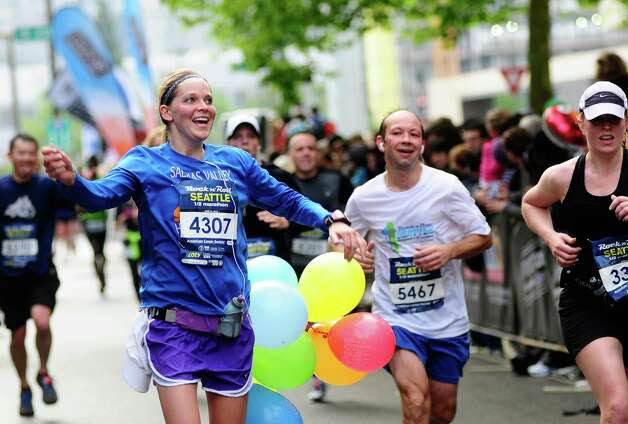 Yayyyy!! I'm so crazy!! To most people, that's what running is: Balloons, goofy smiles, your baaaast fraaands cheering you on from the sidelines, and of course the important thing is just to finish! Anyone who finishes is a winner! Yay!

It's a totally different sentiment.

Now, the reason I bring this up is to highlight the fact that, in order for a movie about an Olympic 400m runner, Indian national record holder, and simply brilliant athlete to be believable, the movie's filmmakers must not only be aware of the difference, but also understand that the story can only be told from the latter perspective. This may also explain why movies about running tend not to be successful: because most people don't want to think about running as a deeply competitive and excruciatingly difficult sporting event.

Most people just want balloons and cake, like some horrible neon-spandex birthday party.

On this count, Bhaag Milkha Bhaag passes the test with flying colors. Indeed, it is one of the more exciting running movies I have ever seen. The gravity with which the filmmakers approached the sport was likewise reflected by Farhan Akhtar himself, who got himself into such remarkable physical shape for the role that his bulging muscles and veins are on display in nearly every scene. And while his shoulders may be a bit too broad by the standards of a great 400m runner, to fault the film for this would be an absurdly unreasonable demand to make of a film that encapsulated competitive running so perfectly otherwise.

Uniquely, the movie avoided the typical cinematic vice of a single training scene, in which the athlete is shown performing various exercises for a minute or two, so that the audience knows that he did practice. By avoiding this, Bhaag Milkha Bhaag manages to do real justice to competitive athletes, whose training is a life-long process that cannot possibly be conveyed with a few fast-panning training sequences set to a cheesy musical number.

Thus, if there is anything negative to be said at all for Bhaag Milkha Bhaag, it is that some may find its authenticity annoying - particularly those balloon runners who wouldn't otherwise choose to watch a sports movie except that it features a frequently bare-chested Farhan Akhtar. Those of us who appreciate the oeuvre, however, couldn't possibly count this as a negative.

In short, I have nothing but positive things to say about this movie.