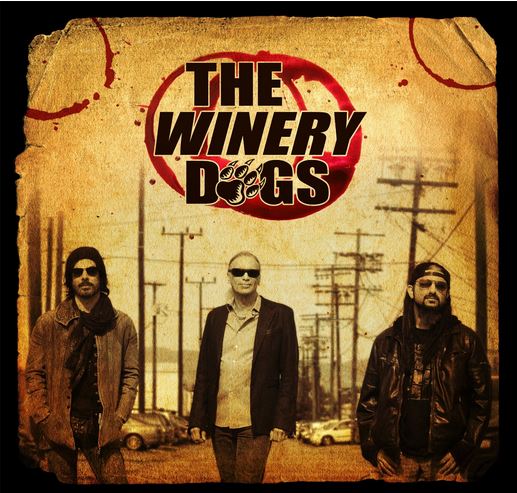 It's half-way through August, and The Winery Dogs' self-titled debut album has been out now for nearly a month. I delayed purchasing this album, because I was sure I knew what I was going to get. I was so sure because all three members of the band have carved out niches for themselves across the musical landscape. I've heard all three of these musicians before in their "main bands," as solo artists, and as contributors to previous super-groups. Basically, the reason I hadn't purchased the album is because I was expecting what most people surely were also expecting: sort of a Mr. Big-meets-David-Lee-Roth band with extra-bombastic drums.

I should not have been so smug. This is a genuinely surprising album.

I say "surprising" because the rule of thumb in most super-groups is for each member to play to his strengths, and that is simply not what The Winery Dogs is about.

That's not to say that the album plays to anyone's weaknesses. For that matter, it would be tough to come up with a list of weaknesses for Richie Kotzen, Billy Sheehan, or Mike Portnoy. The fabulous reputation of all three musicians precedes them, and there is not much I could add to their storied histories. Still, with any musician who has been as prolific and influential as any one of these guys has been, a listener will inevitably approach a new album with their reputations as a back-drop, and this is precisely why I waited so long to buy this album. I was reticent about ending up with yet another boring send-up of classic hard rock in my collection, and also reticent about hearing yet another solo-y super-group power trio.

Fortunately, The Winery Dogs is not a more bluesy, solo-y version of Mr. Big with overwhelming drums. Where a lesser super-group (especially one featuring perhaps the most famous prog-metal drummer in the world) might have opted for over-blown instrumental noodling, The Winery Dogs invoke the fusion influences that Kotzen only really previously displayed in his collaborative work with Greg Howe. Where a lesser super-group (especially one featuring a vocalist with as much power, range, and screaming gravel as Chris Cornell) might have released a hard rock frenzy of shouting and bashing, The Winery Dogs instead slide easily into the clever and elegant chord progressions that we've come to identify with Sheehan's work with David Lee Roth and Mr. Big. And, where a lesser super-group (especially one featuring a legendary veteran of Steve Vai's band) might have filled an album full of melodic guitar-and-bass instrumentals, The Winery Dogs instead content themselves to reach far beyond the standard of vocal-oriented rock music.

In short, each member of the band seems to balance out the "risks" of every other band member by leaning on what is perhaps their least-lauded artistic traits. The result is an album full of stunning surprises, unique twists, and unexpected turns that nonetheless feel completely natural and totally at home with each band member's respective careers.

At times, it almost feels as though the band wanted to defy their reputations and draw thick circles around the more forgotten aspects of their careers: Kotzen's vocals and jazz influences, Sheehan's undeniably strong songwriting, and Portnoy's ability to use rhythm to create emotional underpinnings to a song's climax beyond his technical virtuosity.

That is certainly not to say that the album doesn't deliver what longtime fans want to hear. There is plenty of soloing, plenty of technical displays. But in the context of the songs, which are the true strength of this album, the more adventurous playing feels natural, off-the-cuff, and playful. Where previous performances from any of these musicians may have felt too deliberately technical to some listeners, these performances reflect a trio of mature musicians who are totally comfortable being who they are. The guitar-bass-drums interplay unfolds as though we are sitting there in the studio with them, watching and listening as they jam out their ideas and take only the absolute best of what each jam offers.

Of course, I'm telling my own story here, but this is because The Winery Dogs is an album that captivates the imagination. At last we've heard from a super-group that wants to do more than capitalize on their storied careers by recording a two-week solo-fest. At last we've heard from three musicians who decided that the year 2013 was a good year to come to the market with something to prove... and proved it.

Comparisons to other artists in the music world, then, are both irrelevant and unfair. Irrelevant because The Winery Dogs is a collection of great songs and stunning performances by musicians who expect nothing less from themselves, and who have managed to prove it again and again for as long as I can remember. Unfair because few young artists could ever hope to compete with a power-trio of legends at the top of their game.